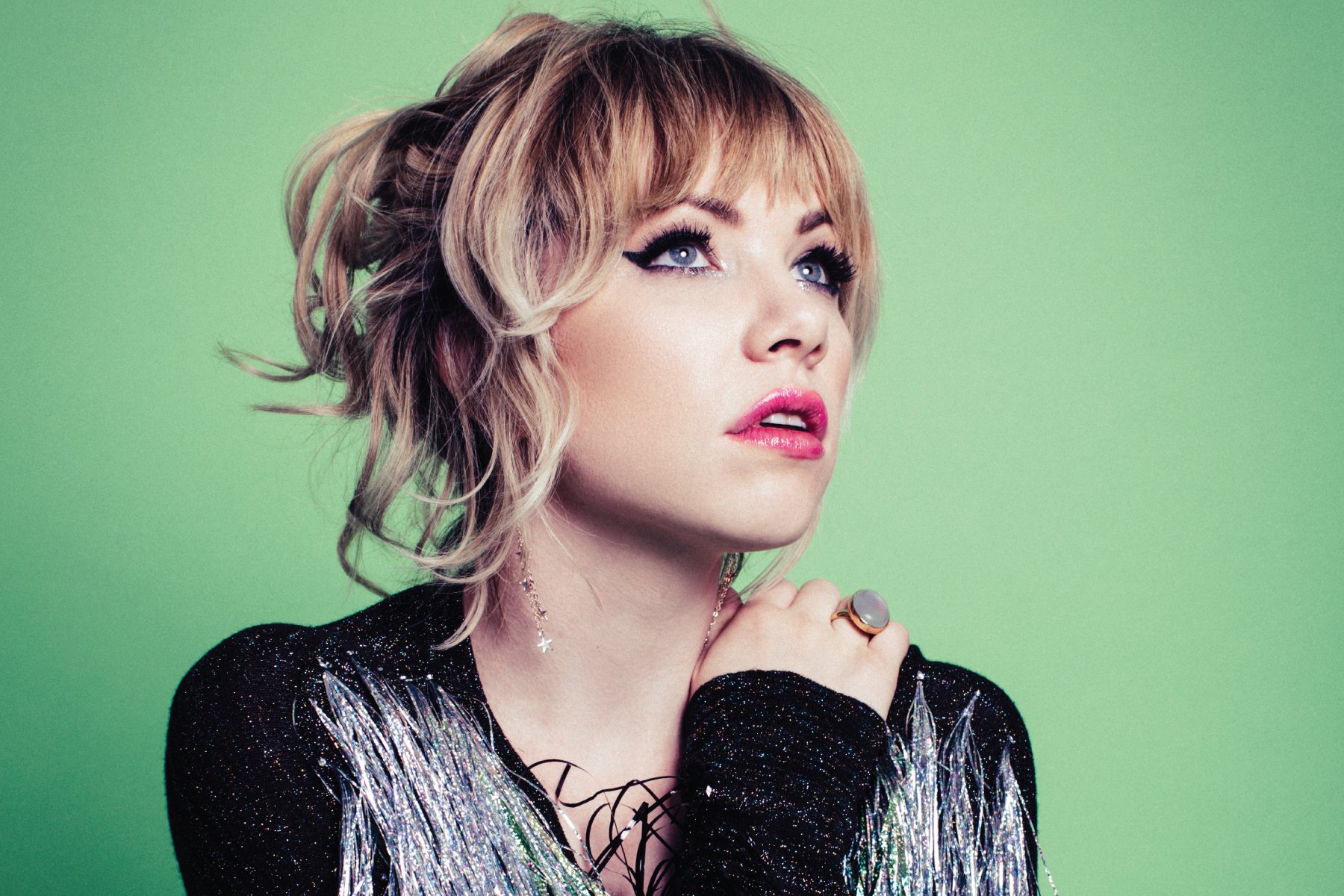 “Petition to give Carly Rae Jepsen a sword,” Tumblr blogger Swordlesbianopinions wrote on Jan. 1, 2018, the clarity of a new year at hand and a vision of pop’s most earnest singer as warrior queen in mind.

“I like her and think she should have one,” the post continued, drolly, without any intention of starting an actual petition. The irony was acute but the affection authentic.

The thing is, we kind of did give Carly Rae Jepsen a sword.

When E•MO•TION came out in 2015, its U.S. pop prospects were so uncertain that manager Scooter Braun went for the sure thing and released it months early in Japan, where Jepsen apparently had more of a lingering following. It was the opposite of a surprise release, of a Beyoncé-level event certain of its ability to stop time and cleave culture. Jepsen had had one of the biggest hits ever—”Call Me Maybe”—but there seemed to be little faith in her power to do so again. The Japanese release was not quite straight-to-VHS, but it did mean the album leaked, and was passed quickly among critics who discretely shared links in Twitter DMs and were given a rare, lengthy window to quietly absorb one of the best records of the year. After the world had legally heard it months later, they agreed: it made No. 3 on Pazz and Jop. Not everyone came around—it got a brush-off 7-point-something from Pitchfork, where sometimes that score is cover for a gushing, secret Best New Music but in this case left the writer calling her an empty vessel: “We don’t learn much about Jepsen,” he wrote, after praising her multiple collaborators.

Less than a year later, there she was, absolutely murdering Pitchfork’s Chicago festival in the Summer of CarJeps, a U.S. tour that didn’t reach the arenas she once played with Justin Bieber as a top 40 phenom but found her—show by show, fest by fest—building an audience that was coming for her, not a hit single. Between the critical acclaim and the fandom, she became, to quote Thanos, inevitable. When somebody did finally give her a sword, albeit plastic and inflated and safe enough to get through venue security, she was playing Lollapalooza.

Jepsen’s statistical place in the pop landscape, her role as an unpopular pop singer, is interesting enough—Carl Wilson has us covered on this—but what’s most important is that what she has now is real, and she built it. E•MO•TION built it. We gave her the goddamn sword.

Dedication is the first album where we get to hear the sound of her wielding it, feel the confidence that shimmers from the vocal performances, from the lyrical honesty, from the wonderful weirdness of the music videos, from the press tour that finds her convincing reporters that she wrote 200 songs for this album after an album cycle in which she also told people she wrote 200 songs. (She told me, on the album tour: “…probably writing, I don’t know, three in-between albums that no one will ever hear before you heard E•MO•TION”). My impression of Carly Rae Jepsen is that she is a sincere and real artist and human and if she says she wrote 400 songs since 2012, listen, I believe her, but let’s not ignore this as a PR move: a songwriter making utterly sure everyone knows that she’s the fucking songwriter. It’s the kind of move you make after somebody hands you a sword at Lollapalooza and thousands of people call you queen on Instagram every day. That stuff is a joke, and it’s for fun, but it’s also not, and you can’t be the object of all that and not absorb its power.

E•MO•TION was, among many things, an album about indecision, about self-doubt and doubt in general as a barrier to romantic love. “Boy Problems” finds her needing a friend (Sia!) to tell her what she already knows is true but can’t face up to. “I Really Like You” is a song about wondering if it’s the right time to make the next physical step with a partner she’s crushing on but doesn’t yet love. In vintage house bop “I Didn’t Just Come Here to Dance,” “I didn’t just come here to dance/if you know what I mean/do you know what I mean?” is the perfect Jepsen lyric, a disco diva come-on immediately fumbling into insecurity. It could’ve been a line of dialogue in a late 2000s Michael Cera movie about high school.

Even when Jepsen stopped getting in her own way in the songs of this era, there was a sense of teenage inexperience: the post-album single “Cut to the Feeling” was less about celebrating the chemical rush of new love (or orgasm) than it was about imagining it: “I want to cut to the feeling,” she sings, and in a song where “I had a dream, or was it real?” is the opening line, makes it pointedly unclear if she’s ever felt that feeling before. The song builds to such remarkable euphoria that the question fades enough to ignore, but it doesn’t disappear.

That’s not the Carly we get on Dedication, whose confidence and sense of self is also colored by the biography that it sprang from the end of a long-term relationship and the launch of a new one. Consider “Real Love,” Dedication‘s lyrically bleakest track: it envisions a “world going crazy,” perhaps a nod to the current dystopian political landscape, but the song is aimed at someone specific, someone who’s been lying to her, and then we get this: “I go everyday without it/All I want is real, real love.” If this is about a partner, holy shit, what a moving, anguished evaluation of a broken relationship. This is not “Gimmie Love,” a song where she wondered if she wanted too much. She knows better now. She knows her worth. (Let’s note the possibility here that these songs are characters, and not strictly confessional: the growth of their narrators, I think, remains the same.)

Lead single “Party For One” strikes the clearest contrast—like an older sister to “Boy Problems,” it embraces a breakup with strength and certainty and Cyndi Lauper-level self-love. Jepsen here doesn’t need a girlfriend’s advice, and she doesn’t even need closure: “If you don’t care about me,” she sings, but she’s not waiting to find out. This is, of course, still Carly Rae Jepsen’s version of a self-love anthem, and she doesn’t go full roaring Katy Perry. “I’m not over it,” she admits, “but I’m trying.” The feeling-chasing desires of E•MO•TION are still here, but pointed in a different, more mature direction.

Carly-as-evolving-lyricist is fascinating, and so rewarding for E•MO•TION (and “Call Me Maybe”) listeners who have always appreciated who writes her songs without having to be hit by a 200-track bus. The music is where Dedicated loses a step. The confidence to explore, to stray from the album’s purported initial “chill disco” agenda, means if you write 200 songs, you’re probably going to end up with a regrettable No Doubt knock-off (“I’ll Be Your Girl”) and somehow a track with perfectly adequate indie-pop act Electric Guest that aims maybe for ’90s R&B for… reasons? It’s fluff. (When I saw the track list I mistook Electric Guest for the Drive soundtrack’s Electric Youth and that would’ve been the inspired choice.)

E•MO•TION, too, was sonically choppy, but outside of the clumsy “L.A. Hallucinations,” only got better when it tried things outside of its core ’80s pop-anthem DNA. There is just nothing here quite as astounding as “Let’s Get Lost” or as lovely as the slo-mo synths of “Favourite Color,” but enough that comes close for Dedicated to still feel like an achievement. I’ve taken to making playlist edits of albums because it’s 2019 and why not, and my version of Dedicated cuts it to 11 songs, a count I’m sure will expand if she opens the vault for another B-sides album.

Probably the album’s most left-field track is my favorite: “Everything He Needs,” which borrows a chorus from Harry Nilsson’s song “He Needs Me,” Olive Oyl’s hesitant ballad from a live-action Popeye movie. Jepsen writes around this snippet, expressing the comfort of partnership, vividly—“like pressure points, my love can ease him in my hand”—while making it all sound like Hall and Oates in space. It is so gently, adorably funky and I need another 12 tracks just like it immediately. Among the other winners, “Julien” evokes Feist’s “Inside and Out,” and if Carly ever wants to abandon the ’80s for full-on classic Dionne Warwick worship, I will be first in line. The other early singles—“No Drug Like Me,” synth-y, heady, amazing; “Now That I Found You,” fizzy, euphoric, perfect Carly—are excellent, and I do wonder if hearing and obsessing over so much of the album before release makes some of the lesser album cuts feel weaker just by lack of familiarity.

A through-line for the album I keep noticing is its emphasis on mornings: if Lorde’s Melodrama was about the blurred, exaggerated feelings of neon nights, Dedicated literally starts a third of these songs with lyrics about waking up. There’s knowing there, clarity: the light of day, of seeing things as they are, of a morning after that comes with last night’s commitments and consequences. It wasn’t a dream, it was real, and there’s no escaping the joy and pain that can come with that. On Dedicated, Jepsen is brave enough to tell us about all of it, a queen in her castle, a knight of the realm.