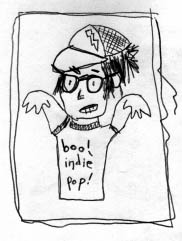 Boat is a Seattle-based “sloppy/poppy” band that veers toward Pavement at some moments and a long lost Elephant 6 band at others. Either way, they make the kind of music that gets stuck in your head for days on end. Definitely one of my favorite local discoveries this year.

Making the kind of music that any respectable late 60s Kinks fan would love – though they aren’t afraid to pay homage to The Monkees either – The Bicycles captured my heart earlier this year with the release of The Good, The Bad, and The Cuddly. The best song on the record, “Gotta Get Out”, is exactly two minutes of insanely catchy pop bliss that you shouldn’t miss out on for even a second longer. C’mon, give your ears a treat.

I’ve talked a good deal about Kite Flying Society over on my site in the past few months, but I’m constantly looking for new people to push it on. Their sound is unique but familiar, conjuring up images of The Shins performing a Beach Boys record in the middle of a particularly wonderful summer.

Kite Flying Society – “If I Could Split”: mp3