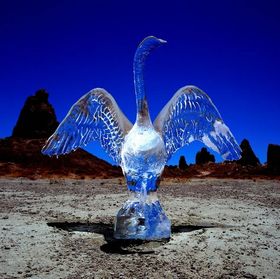 This album could’ve been huge. Frontman Jordan Zadorozny was pals with Courtney Love and co-wrote some tracks on Celebrity Skin; August Everywhere was released on Dreamworks Records in 1999, a time when the label was hot thanks to signing Elliott Smith and notable others. But the album tanked, commercially and presumably (as I haven’t heard it mentioned in 8 years since) critically.

And no wonder: Blinker the Star stood far apart from many of the sounds of the era. It’s not an album of worn-out alternative rock cliches, or burgeoning nu-metal, or Third Eye Blind-esque pop/rock. Instead, it’s a huge, surreal, melancholic rock album — the Smashing Pumpkins with less of a sneer or the Flaming Lips on downers.

“Below The Sliding Doors” is both hypnotic and triumphant as it shifts from its arpeggiated verses to a stirring, string-laden chorus. “Your Big Night, Sandy” is taut, sharp — Zadorozny sings in clipped sentences until the slacker chorus. The rockers are all winners, especially the strained, groping “I Am A Fraction.” The ballads are a bit stranger, but even slow suicide anthem “There’s Nowhere You Can Hide” holds up pretty well, all things considered. I’ve grown out of the majority of the records I was listening to back in 1999, but a few of them (Fiona Apple’s When the Pawn…, Ben Folds Five’s The Unauthorized Biography of Reinhold Messner) have stuck with me. This is one of them.

(Hear more tracks from August Everywhere on the band’s site)