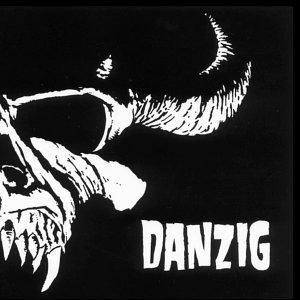 It is still pretty chic to like the Misfits, and for good reason; their breakneck, simple, lo-fi horror movie homages were undeniably catchy, sort of like what the Strokes first album would sound like on a turntable in Hell. But largely and wrongly overlooked is the stellar work Danzig would do after he left his Lodi, New Jersey football squad bros.

After Danzig dramatically expanded his sonic pallet with Samhain, a then-young-and-ambitious Rick Rubin hand-picked the devil-locked vocalist for his new Def Jam label in 1986. Stipulating that he would sign only if Rubin would allow Samhain bassist Eerie Von in on the new project, Danzig joined the label. Rubin then added drummer Chuck Biscuits (who had done stints with Black Flag, Circle Jerks, Descendents, and a then-young-and-ambitious Red Hot Chili Peppers) and guitarist John Christ, whose only notable experience was as a musical interlocutor of the bearded producer.

The quartet would unite around a new set of songs Danzig had written for the new band, which took fresh lyrical and musical turns. Departing from the film plot summaries of his previous projects, Danzig positioned most of his latest narratives from the point of view of Satan. But this was not Satan qua underworld dungeon master; Danzig’s new protagonist was a sexy and seductive villain, with a certain allure attached to his power and threats.

The arrangements changed dramatically as well; gone was the musical vocabulary of punk, swapped for an extremely spare and slow Sabbathesque blues. Danzig I is all closed hi-hat, ringing low-gain chords and straight-8ths basslines. Most of the songs don’t exceed 100 bpm, making them seem to slither along, focusing the spotlight on the bandleader’s voice – and oh, how it shines. If you ever doubted that Lucifer would have a voice like the best elements of Jim Morrison and fat Elvis, may your doubts be put to rest. Finally, Rubin’s production, with its wide panning, quickly-gated drum sounds, and rich, dark reverbs puts a shimmering black finish on band’s sound

Though it dropped in 1988, the album wouldn’t see a hit until 1992, when a punishing live version of Danzig I‘s centerpiece “Mother” surfaced on an EP. While Danzig: the Band’s next two albums would also see some high points (notably, “Long Way Back from Hell” and “Dirty Black Summer”), they were mere rehashes of the crisp and pitch dark blues from the band’s first album. After Danzig IV, the band would lose John Christ and the distinct sound they had already perfected on their debut.

(Danzig was released by American Recordings in 1988. You can buy it from Amazon)