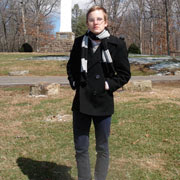 2009 is here and I still have 20+ albums to listen to before I make my 2008 list! Argh! Anyway, Dent May is a Jens Lekman fan if I’ve ever heard one. His mostly lovable debut album, The Good Feeling Music of Dent May and His Magnificent Ukelele, is full of silly, strummy, self-deprecating odes to foreign cities, drinking and beautiful women crooned in Dent’s best affected accent. Unlike his idol, though, Dent has some trouble striking the delicate balance between humor and profundity that has served Jens so well, leaving some of the songs more mocking than Magnificent — but it should more than hold us over until Our Man In Sweden makes his triumphant return.

(The Good Feeling Music of Dent May and His Magnificent Ukelele is due February 3, 2009, on Paw Tracks)

Looking for new music? Click below for more recent and upcoming 2008 releases, or visit our MP3-filled 2009 Album Release Calendar.