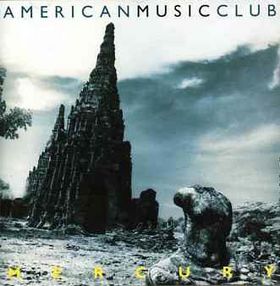 American Music Club’s Mark Eitzel performs at Largo on Saturday. What follows is the second in my two-part look at the band’s ’90s heyday. Part 1, on Everclear, is here.
Update: The show’s been canceled! But the review stands.

American Music Club’s follow-up to the lauded Everclear came in the wake of the grunge explosion. Mercury was recorded in 1992 as Nirvana and Pearl Jam took over the charts and released the year after; it was also the band’s first major-label release, finding them joining Mudhoney on Reprise Records. That influence certainly permeates the album: the guitar tones are harsher, the songs are faster and more rhythmic, and singer Mark Eitzel — never a shrinking violet — revels his band’s newfound muscularity on songs such as “Keep Me Around.”

In that song and beyond, the guitars squeal with intensity to match Pearl Jam — or even Sonic Youth — and feedback looms like fog illuminated by headlights. The brief country accents of Everclear are gone, except for a reliance on waltz time, as in the acoustic strummer “Johnny Mathis’s Feet” – a mock power ballad that satirizes as much with its (keyboard?) strings as it does with Eitzel’s lyrical wrestling with fame and America. “He reached out with his red, white and blue hand,” Eitzel sings of Mathis, noting that a “real showman knows how to disappear in the spotlight.”

It’s a more cynical look on multiple levels than, say, “Jesus’ Hands,” the Johnny Cash-evoking album closer that ended Mercury, and the heavier sound befits the defeated, cynical lyricism. For a band that had finally “made it” – critical accolades, a major label deal – the journey seems to have left them hollow and burnt out. Perhaps the best example of the album’s sarcastic bent is the sardonically titled “More Hopes and Dreams” – the two-minute track is all but empty, merely a static three-note loop.

The album ends with a ray of light in “Will You Find Me?,” a song doubtful of salvation but willing to ask for it. “The closer I look, the more I see your limits begin to show,” Eitzel sings against the bright backdrop of a plucked acoustic guitar. Perhaps he sang to himself, for Mercury finds the band exploring the outer reaches of despair. What they brought back can be stunning, but one can’t help wondering if the rewards were worth the cost.