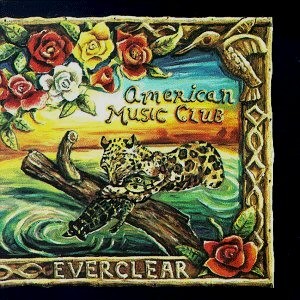 As far as reunions go, American Music Club‘s hasn’t garnered quite the attention of the Pixies or My Bloody Valentine. But then, they were never ones for the limelight. The California band split after 1994’s San Francisco and reformed almost 10 years later for 2003’s Love Songs For Patriots; frontman Mark Eitzel arrives at Largo on Saturday and is the weekend’s top ticket if you’re not at Coachella. First, though, let’s look back at where he began in our latest installment of The Canon, Examined.

1991’s Everclear was the band’s fifth album and its most unanimously praised, winding up in Rolling Stone‘s year-end top 5 with a Songwriter of the Year nod for Eitzel. All with good reason. Aside from “Crabwalk” a mid-album Stones-y honky-tonk exercise that should’ve been saved for the b-sides, Everclear is a focused, compelling work. Equal parts moody ruminations and ferocious rockers, the album matches the passion of larger-scale anthems with pill-dazed atmospherics. “Royal Cafe” incorporates “Crabwalk’s” country-western influence more effectively, seamlessly sewing banjo and pedal steel into the band’s slowcore cloth. “Sick of Food” taps into the still-fresh (1991, natch) atmospheric jangle of the Smiths to tell the story of an AIDS patient, and album closer “Jesus’ Hands” evokes the twang of Pavement’s yet-unwritten “Range Life” without the irony. Doing his best Johnny Cash, Eitzel sings, “I’d like to hang out / but I can tell that you’re not a drinking crowd… I got a thirst that would make the ocean proud.”

Everclear stands as a strange, successful intersection of influences: the Americana fabric of Cash and Bruce Springsteen rests alongside the then-current influence of acts such as the Smiths and U2, with everything pointed at Eitzel’s one-way trip to lonelyville. As we’ll discuss tomorrow, the band was about to leave Alias Records for a major and the bigger sound of Mercury; this did not cheer him up. Everclear, though, should bring a smile to your face — or at least warm your wounded heart.