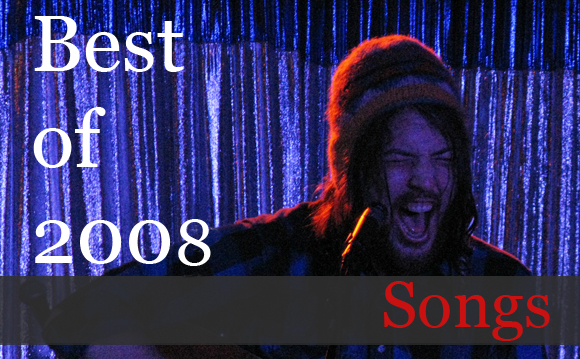 I went a slightly different direction for 2008’s songs list — there’s some crossover with yesterday’s albums list because my favorite three albums happened to have my favorite three songs of the year, but other than that I tried to spotlight 20 singles and album tracks by artists who didn’t quite stand out enough across the board to crack the albums best-of. Get your left-field on after the jump and remember, the Rawkblog pledge drive ends this weekend — please give now!

5. Hayden – “The Van Song”: mp3
Simple but elegant, “The Van Song’s” unembellished piano runs hand-in-hand with Hayden’s plaintive vocals, until he jumps an octave and the song gives way a horn solo. It feels lived-in and off-the-cuff without sacrificing craft — the combination that, when he strikes it just right, makes Hayden one of his generation’s finest folkies.

4. The Walkmen – “In The New Year”: mp3
You & Me was a disappointment — two-thirds great, one-third dross — but “In The New Year” speaks to all the Walkmen’s best qualities. It’s at once celebratory and funereal, a look forward even as the present crumbles around their ankles. Would that they could muster this kind of passion with every song.

3. The Hold Steady – “Constructive Summer”
We built this city on rock ‘n’ roll. Bernie Taupin would be proud.

2. Cut Copy – “Strangers In The Wind”
The most wistful moment on In Ghost Colours, and the most affecting for it. “Run to the lights of the city / these moments passing will be there,” goes the chorus, and an album embraced by the youth begins to grow up.

Al Green – “Take Your Time” (featuring Corinne Bailey Rae)
The Reverend’s still got it! And Corinne finally gets a song worthy of her magnificent pipes.
The Explorer’s Club – “If You Go”: mp3
The year’s finest ballad. It plays with the ease of a Neruda poem and the teen nerves of Buddy Holly.
Empire Of The Sun – “Walking On A Dream”: mp3
Which of these things is not like the others? The good half of Empire of the Sun’s glossed-up debut hits me as hard last year as any beard-folk — this song is like Phoenix with a drug problem and a recurring role on Miami Vice.
The Wedding Present – “Don’t Take Me Home Until I’m Drunk”: mp3
The best bit of the Wedding Present’s Albini-produced mid-life crisis treatise on barhopping and romance in Los Angeles.
Angela Desveaux – “Soon Enough”: mp3
The catchiest damn thing I heard all year. What a hook — and earnest, too.
Vivian Girls – “Where Do You Run To”: mp3
My least favorite Girls do, yes, have a certifiable jam. The Ronettes via Beat Happening.
Throw Me The Statue – “Your Girlfriend’s Car”
The Clientele – “George Says He Has Lost His Way In The World”
Jon Brion – “Little Person”
From the Synecdoche, New York soundtrack. If only he sang on it.
The National – “Tall Saint (Demo)”
If this is actually a demo, I’ll eat my blog. Biting my nails until LPV.
Garlands – “David”: mp3
Charming and it’s about me. Indie pop represent.
Silver Jews – “Open Field”
If Lookout Mountain, Lookout Sea is really David Berman’s last album, he went out on a high note — or several, sung by his wife and good intentions.
Gentleman Jesse and His Men – “You Don’t Have To If You Don’t Want To”
While the Gentleman’s debut album wasn’t as fruitful as the band’s early singles hinted at, it offered at least one particularly ripe jam, a big, juicy bite of ’60s garage that silently pleads with an oblivious girl, “But I want to!”
Ports of Call – “Aireals”: mp3
Expert My Bloody Valentine aping tempered with just enough melodic clarity.
David Vandervelde – “I Will Be Fine”: mp3
A near-perfect slice of ’70s session-pop sunshine from an album that barely missed my top 30.