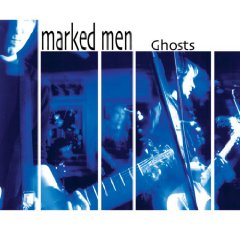 As I noted in my Jay Reatard review yesterday, it already feels like the explosion of next-wave lo-fi/garage that burst into indie popularity last year is fading from public favor. Let’s hope there’s still time for the Marked Men, a Denton, Texas band who released Ghosts in January to notice more minimal than a Paris Hilton bikini. Ghosts is a fast, furious rock ‘n’ roll record, a super-charged spin on Gentleman Jesse and His Men’s own amp-busting retro-rock (which I was, uh, maybe a li’l hyperbolic about last year). But with membership in these under-the-radar acts rotating as fast as their fist-pumping 7″s, it’s amazing that the Marked Men have made it this far — Ghosts is their fourth album, and their experience shows. Unfortunately, singer/guitarist Jeff Burke reportedly ditched the band to move to Japan after its release, so it might also be the end of the line. Let’s all buy it and get him to come back, yeah? Lo-fi needs some heroes.