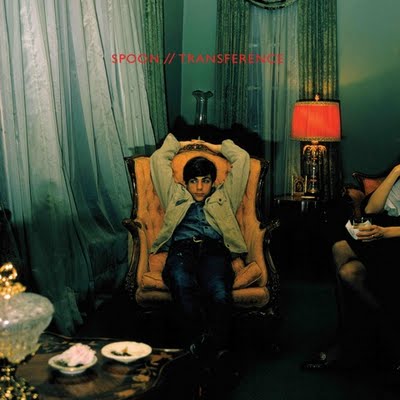 I’ve been listening to a lot of Pavement lately, and the more I do, the more increasingly clear it becomes that Spoon is the Pavement of the 2000s: Indie rock’s standard bearers, at once reliable craftsmen and restless weirdos. After a career of Spartan, rigid power-pop, the band went maximalist on 2007’s Ga Ga Ga Ga Ga — their unexpected best record, and an Elliott Smith posthumous collection aside, that year’s finest hour.

An alternately angry, druggy release, Transference picks up where Gax5 left off.

It thrashes toward gritty amp-busters (“Written In Reverse,” “Trouble Comes Running”) and the cosmic disco hinted at on prior tracks such as “The Ghost Of You Lingers” (cosmic) and “I Turn My Camera On” (disco). LCD Soundsystem could take a lesson or two from songs such as the rainbow-synth’d “The Mystery Zone” and the DFA-esque “Nobody Gets Me But You,” a bristling paen to paranoia. Singer Britt Daniels remains one of rock’s better vocalists, cutting loose on “Written In Reverse” in a way that almost regrets his devotion to melody. Thematically, he offers his usual blend of muddied emotions and second-person addresses, wondering, “Is love forever?” on a titular song far too brief to answer the question. On “Nobody Gets Me But You,” the title is more Public Enemies than love story, but elsewhere, he sounds more optimistic: “I’ve got nothing to lose but darkness and shadows,” he sings on the recycled EP title track “Got Nuffin.”

But back to Pavement. Transference might be their Wowee Zowee — an unsolved Rubik’s Cube where the pieces don’t quite connect. Yet the band has arrived at their wildest effort deep into a career of constraint, steadied by hands that never let the album sprawl or spread itself too thin. This isn’t madness; it’s Spoon.

(Transference is out Tuesday from Merge)