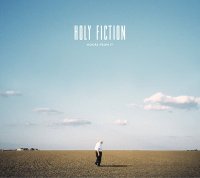 There’s nothing faked about Holy Fiction, a band as sincere as they come. It’s not a bad thing. Singer Evan Lecker has the pipes of an equally tormented sibling of Jason Molina, standing as the wounded, baritone heart of a lushly layered album that draws on the ethereal briskness of the Sea and Cake and the chamber-rock melodrama of Carissa’s Weird. While the Sea and Cake get by on Sam Prekop’s vocals breezing right alongside the arrangements, Lecker brings a grungy intensity to Holy Fiction’s sound, making for a record that’ll sit awkwardly among its less, ahem, emotionally direct indie rock colleagues. In that respect, Carissa’s Weird is the more obvious influence, but Holy Fiction’s efforts are less damaged – and thus less draining for the rest of us. Hours From It is a promising debut; I’m looking forward to what Holy Fiction invent next.

(Hours From It is out today from Nile Music)