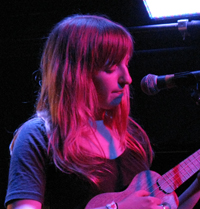 The cynical part of me thinks White Hinterland’s rebirth as a dubstep-tinged neo-Kate Bush is the result of the inexplicable success of acts like Bat For Lashes and the ongoing Cute British Keyboardists movement. That, and the Casey Dienel-fronted band’s debut was a rare thing – gentle but biting jazz-folk far too fresh and wild for Starbucks-swilling Feist listeners. (Myself, um, excluded.)

But what we’ve lost in the coffee shop department, we’ve gained in everything else: “Icarus,” the first single from White Hinterland’s March-due Kairos, is a serious songwriter’s answer to the dark electro evocations of acts such as Bat for Lashes and Fever Ray, acts I’ve always disliked. Dienel’s voice is as gorgeous and vulnerable as ever, but it’s her ear for arrangements that makes the song a promising shape of albums to come. (Via Gorilla vs. Bear; photo by David Greenwald)