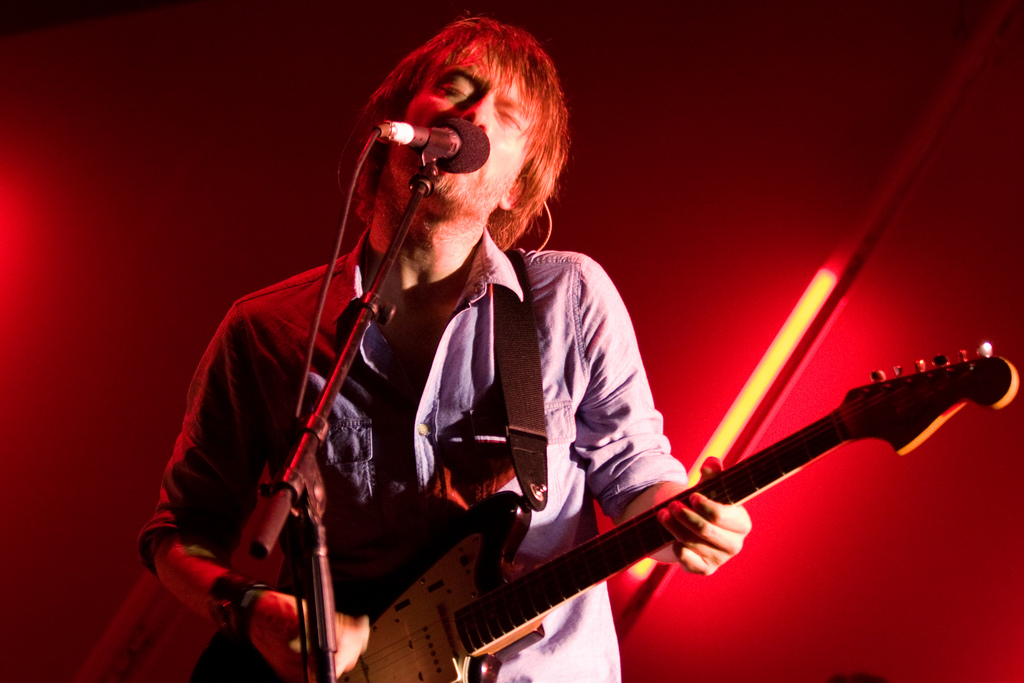 Is Radiohead’s eighth studio album done?! @diditleak? Is Thom hanging out in Malibu?! Everything you need to know after the jump.

>> Way back in June 2009, the band released photos of themselves on Dead Air Space working on new material in Los Angeles.

>> In August, Radiohead released charity single “Harry Patch (In Memory Of),” followed shortly by the mysterious leak (viral marketing?) and consequent official free download of new track “These Are My Twisted Words.”

>> Thom has been DJing at Hollywood’s Roosevelt Hotel as far back as September 15, 2009.

>> He released a single, “Feeling Pulled Apart by Horses” b/w “The Hollow Earth” that month as well.

>> Thom played three shows (two at the Orpheum, one at the Echoplex, one I had the chance to shoot) at the beginning of October 2009, which included a number of new songs – one of which, “Lotus Flower,” he played again with Radiohead at their January 2010 charity gig for Haiti, an L.A. performance that seems to have fallen smack in the middle of…

>> “We head off into the studio in January to continue on from the work we started last summer,” Ed O’Brien wrote on Dead Air Space in December (Thom decamped to Copenhagen to spend time railing against global warming over the holidays). That studio by all accounts being in L.A. Thom also did a Haiti-benefiting DJ gig at the Roosevelt (natch) in January.

>> His band for the shows will rejoin him at Coachella in April, where they’ll probably run through a similar Eraser-centric (not a bad thing!) setlist given the short span of a non-headlining timeslot.

>> Thom’s also guesting on the new Flying Lotus album, which he presumably cut with the beatmaker in L.A.

>> However, according to a report today from Entertainment Weekly’s resident Radiohead expert and Rawkblog pal Simon Vozick-Levinson, the band’s next album is not yet finished.

>> In short: there’s obviously a lot of new material and the band is probably just taking its time planning their next bizarre/Lost-worthy viral campaign before dropping the record. The real question is if Thom – who appears to have spent the most time in L.A., recording, rehearsing and otherwise — plans to drop another solo record in the coming year, too, or if he’s just enjoying a well-deserved chill sesh wearing all-white outfits and chowing at Nobu. He’s written on Dead Air Space that the side-band is “for fun,” but given how awesome they sounded in October, let’s hope it gets serious.

>> And another thing: Radiohead producer Nigel Godrich has been playing frequently on Beck’s Record Club sessions, not to mention that Twitter rumor of the Radiohead/Beck charity concert. WHERE IS THE COLLAB?!