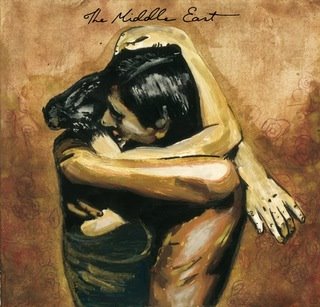 I wonder if it ever dawned on Andy Warhol that someday, everyone would have their 15 minute of fame… simultaneously. Indie rock’s greatest problem at the moment, whether one’s in a band trying to signal through the noise or a listener trying to sort through the muck, is the sheer glut of material: in any given day, Pitchfork (just for instance) reviews five albums, three tracks and drops another half-dozen MP3s on Forkcast. And they’re supposed to be the filter! No wonder Best New Music bands become such lightning rods for sales and attention: it’s too much fucking work to listen to the rest.

As buzz band vehicle SXSW revs up this week, Australian act The Middle East are the latest act to land enough Internet praise to catch the scent of whatever “hype” means in 2010. But how? Their debut record, 2008’s The Recordings of the Middle East, is an intermittently solid record that wavers between wonderfully insistent harmonized folk (“The Darkest Side,” “Fool’s Gold”) and the milquetoast vocal post-rock available on any noise-oriented CD-R blog. However, that debut record was never released in the U.S. — and a trimmer EP, with some of the sub-Sigur Ros meanderings sliced off, made it here last October. A star is born! Rumor has it the band’s next record is done; if they bring the new songs and a sharper direction to SXSW, it may be clear if The Middle East are a project with a future (and as ethereal acts go at the moment, I’d rather recommend The Rest’s 2009 debut), but until then, The Recordings Of shows enough promise to justify these first few minutes in the spotlight.

The Middle East – “The Darkest Side”: mp3