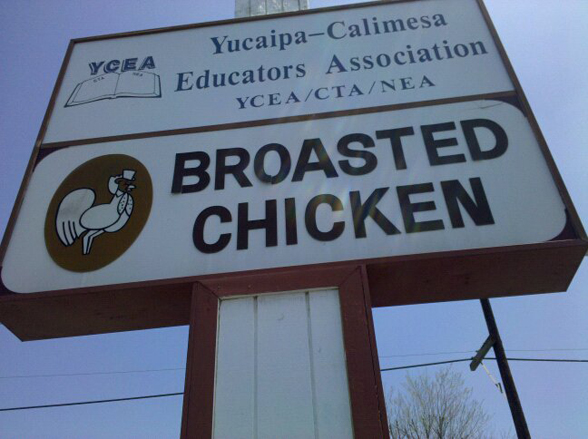 Good lord, Coachella. I haven’t been here since 2006; after SXSW, a festival that spreads its 10,000+ badge and wristband holders across dozens of downtown Austin venues, I forgot how overwhelming the sight of 75,000 people roaming across the Empire Polo Club looks. (And smells. It smells like pot.) I didn’t get a photo pass this year and idiotically forgot my point-and-shoot’s new batteries yesterday, so instead, some brief notes:

* I’ve jokingly referred to the fest as “Bro-chella.” On the way in, we drove by a restaurant called Johnny’s Broasted Chicken. Fate?

* Two lights were busted on Monroe, the main street in to the grounds and the one on which we idled in the car for almost three hours to crawl three miles from the freeway. C’mon, Indio! Though traffic probably wouldn’t have been any better. Fingers crossed it’s more mellow today.

* Coachella may have sold out, but that didn’t stop dozens — probably thousands — of people from booking hotel rooms and hanging out outside the fest, trying to sneak in or buy tickets. I bet they got in, too — nobody searched my stuff or even scanned my ticket. I’d sneak in my DSLR but I probably still can’t get into photo pits without a wristband. Oh well.

* Pot hangs in the air like smog in L.A. It’s incredible. I saw at least 5-6 instances of people toking up in the middle of the fest’s giant crowds — not like anyone would bust them.

* Gil Scott-Heron, at the Gobi Tent, laid down soul so crackling and grooves so deep it would’ve taken chemical aid to see the bottom. A living legend for a reason.

* Passion Pit, who I’ve seen before, weren’t any more impressive on the undeserved Outdoor Theatre stage, but Coachella kids love to dance. Apparently they also love horrific falsettos and a singer seemingly drunk with the power of a festival crowd: “Holy shit, Coachella!” was his most memorable exultation, and I’ve never seen a performer so staggered by his audience.

* Grizzly Bear: The Grizz brought it, as usual, but got kinda screwed with a tent spot instead of a main stage.

* LCD Soundsystem: James Murphy, unlike David Bowie or the Talking Heads’ David Byrne, has crafted himself the opposite of a compelling image and persona. Given his immaculate attention to his production work, one can only assume his chubby, stubbly, underdressed stage presence is intentional (and presumably ironic). “All My Friends” was a tremendous moment and there’s no questioning his band’s tightness, but I’m sorry, guy — you need charisma, not a hangover, to make skeletal songs like “Us V. Them” or “Pow Pow” not boring.

* Vampire Weekend: The little indie-rock band that could played like they deserved to have been America’s No. 1, if only for a week. I don’t love the new record like the debut, but they sounded great whatever they played.

* Jay-Z: The dozen or so people at the house we’re renting (it’s that kind of weekend) kind of hated on Jay when we got back in the wee hours last night, but this felt like a historic set to me. Jay, 6’2″ of towering charisma, commanded the mic like Bono at the Rose Bowl. There’s never been another hip-hip star of the caliber Hov is now in — festival headliner status, with two decades of hits — but he proved, if it needed proving, that it could be done. Having a huge, forceful live band helped. They played with Marshall stacks, as if the crowd needed more notice that Jay wasn’t fucking around. He smashed through hit after hit after hit, finally closing things out with a trip through his back catalog (“Big Pimpin’,” “Hard Knock Life”) and a version of “Young Forever” aided by fireworks and Beyonce. Beyonce! On the main stage at Coachella! Then Jay name-dropped his favorite indie rockers: “Passion Pit, Grizzly Bear, Yeasayers.” An epic end to an epic night. On this note, I can only imagine the Grizzly Bear guys, Solange, Beyonce and Jay were broing down at Yeasayer today, talking about their favorite tracks on Blueprint 3 and Veckatimest. A boy can dream.