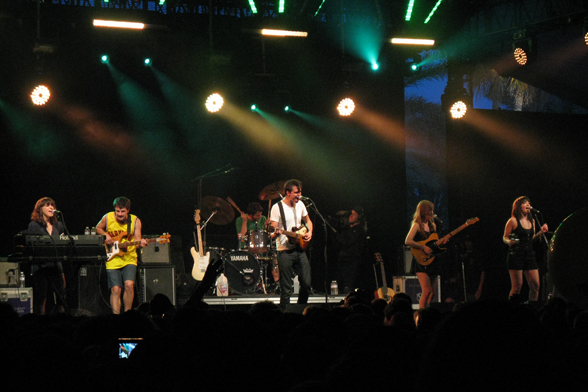 
Despite a full night’s sleep (in a bed!), the sustenance of a frappuccino and In and Out for lunch, and a willing heart, we still managed to stupidly get stuck in traffic and arrive too late for Camera Obscura. Luckily that, and being briefly locked out of our house about 10 hours later through no fault of our own (natch), were the only flubs in an otherwise beautiful day at Coachella. My notes after the jump.

* The crowds: I’m going to address this one more time and let it go, but Jesus, guys: I haven’t been since 2006, but it is just out-of-control wall-to-wall here. On Saturday, the gate volunteers didn’t even bother checking my ticket — and literally every person I talked to gave me an anecdote of watching people just straight-up walk in without one. In addition to the extra 15,000 tickets they sold this year, wrongly assuming that some people wouldn’t come for all three days after being forced to buy a three-day pass, it’s making the fest just short of a giant clusterfuck. For all the kerfuffle from broke, entitled college students over the switch to three-day tix, it turns out someone should’ve listened — the same generation that has no trouble stealing music on the Internet apparently has no reservations about doing it in real-life now, either. And when it’s this easy, why should they? Those of who paid to be here (myself included) look like fools. On the performance side, bands like Beach House, the XX and MGMT all drew what looked like record crowds for themselves, and while they’ve got the buzz to justify them, that didn’t make it any less insane to see.
* Girls in bikinis: They were everywhere. It’s been like the UCLA Undie Run writ large. If only I could convince my girlfriend to join them in dignity abandonment.
* Phone service: I bought a Droid prior to SXSW last month because I knew I’d need a smartphone and I didn’t want to suffer through AT&T service just to have an iPhone. As a result, unlike many here, I’m having little trouble texting and Tweeting, which I’m sure has been a relief to everyone wondering if bands are killing it in real-time. Team Verizon!
* Drugs: I haven’t seen so many pot pipes in plain view since I went shopping in Cabo San Lucas. Woodstock forever, y’all.
* Beach House: See my review on Buzzbands.la. Suffice to say, album of the year contender Teen Dream comes to life with authority.
* Tokyo Police Club: Playing songs from their Rob Schnapf-produced new LP, the Ontario band seems to have settled into their sound: the guitar attack and drum rhythms of ’90s emo softened by the melodic and vocal charm of the British Invasion. I don’t know if their popularity is enough to have deservedly landed them a Coachella Stage slot, but they didn’t waste their big moment.
* The XX: Wrote this one up for BuzzBands as well, but in a word: boring. The polar opposite, in talent, energy and presence, of the band below. 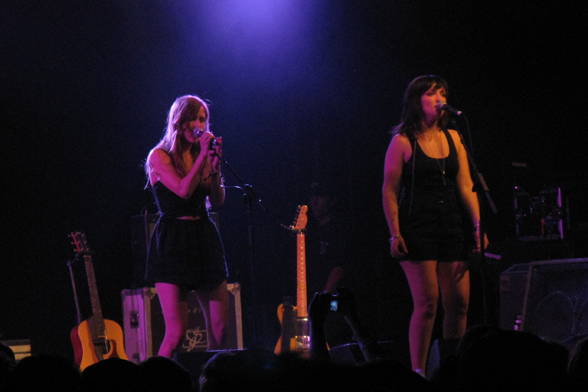 * Dirty Projectors: After missing their Halloween show (not my fault) and Disney Hall extravaganza (yup, my fault), I was long overdue for a union with the band behind my favorite album of 2009. They were beyond worth the wait, nailing their involved harmonies and virtuosic guitar lines with seeming ease — and plenty of rock swagger. A note to Dream Theater and friends: this is how you show off and still satisfy. (Also: Apparently Jay-Z was there, as he and Beyonce were for a bunch of the day’s shows. Still amazed/pleased by Hov’s very genuine affection for spindly Brooklyn guitar music.)
* Corinne Bailey Rae: Corinne remains possessed of one of the richest voices in modern soul music, and what I caught of her grooving, rock-tinged set at the Gobi whet my appetite even more than the Indio heat. Looks like her new album is a must; bummed I probably missed titanic jam “Put Your Records On.” Anyone know if she played it?
* Teriyaki Bowl combination plate: Better than “Stairway to Heaven.” Good lord. Great food across the board this year and, despite the crowds, reasonable lines.
* MGMT: As I’ve mentioned, I like their new album but am more impressed with the fact that they chose to make it more than anything else — live, they tried a similar tack, testing the audience’s patience with new tracks before inevitably dropping Whitney Port’s song of the decade, “Electric Feel.” Which jammed! But as they strummed through psych-popper after psych-popper, the awareness that I wasn’t watching of Montreal grew to the point where bed sounded like a better option.
* Leaving Lot 6 at 9:50 p.m.: Sorry, bands — highlight of the day! No traffic at all, a Karma point quickly knocked off when we got to our rental home to find the key missing. The crisis was averted a few minutes later and I slept the sleep of the just.