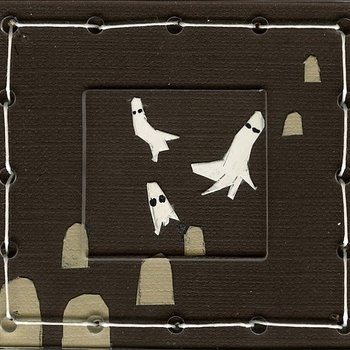 The only thing scary about Ghosty is how long they’ve flown under my radar. The Lawrence, Kansas, band has been recording since 2001’s Five Short Minutes, with only scattered output over the years until joining More Famouser records for a trio of new EPs. Last year’s A Mystic’s Robe was the first of them, three tracks of semi-sweet pop with a craving for melody. Singer Andrew Connor’s sincere tenor ambles through turns of phrase reminiscent of the Zombies or the Beach Boys even as the music opts for a gently minimal indie-pop arrangement approach. He earns his membership in the Droll, Conflicted Singer Club (President: 1996 Rivers Cuomo; Vice-Chair: 2007 Jens Lekman) on the pro-female “My Girl Is Strong,” singing “I don’t want a sleazy sex thing.” Judging by the music, what Connor wants is beauty, best showcased in the spectacularly Brian Wilson-esque “Secret Language.” So nope, nothing scary here – except the thought that you, too, haven’t heard Ghosty yet.