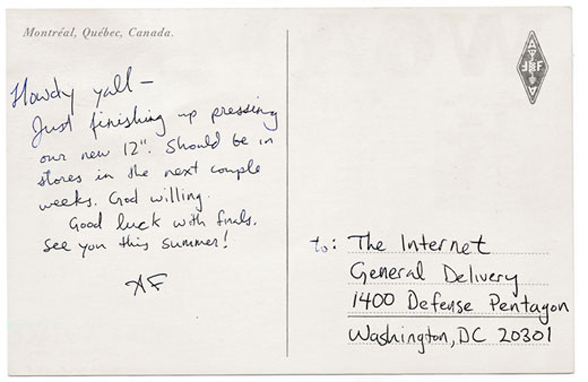 The nerdier among us (which, OK, hand raised) may remember the months and years of waiting for The Dark Knight — and the viral campaign which helped fill the lonely hours at home, alone, laptop a-glow, wondering what Heath Ledger would look like as the Joker. It was worthwhile for a number of reasons: the gestation time of films is long enough for Octomom to pump out another litter; the mystery dovetailed perfectly with Batman’s own role as the world’s greatest detective, and its intelligence only (deservedly!) increased confidence in the prospects of the film itself.

Applying these same smoke screens to music, however, has been less effective. Before giving away promo MP3s, playing a number of late shows and generally promoting High Violet with gusto (and electronic billboards), The National launched HighViolet.com — a sloppy looking Web site that stayed blank for under 24 hours before giving up the secret and generally served as a gratuitous fluffing to the coterie of journalists and bloggers who were in the know for an afternoon. Joanna Newsom’s label, Drag City, kept dead quiet about Have One On Me even as fashion magazines reported the album’s completion, world tours were booked, and hours of new songs were debuted. Finally, the news arrived in the form of a weirdo comic strip and leaked details from foreign labels; the album then debuted to first week sales of 7,000, falling well short of comparable (and more traditionally marketed) NPR-friendly acts such as Andrew Bird. Meanwhile, YouTube secret-keepers IamamIwhoamI are still releasing clip after anonymous clip of increasingly less interesting music and visuals weeks after the thrill of guessing has passed.

On Saturday, Arcade Fire — a band that’s been quick to sic its representatives on the abundant rumors that’ve sprouted since the 2007 release of sophomore fumble Neon Bible — called a June 1 Amazon listing for an alleged new single, “Suburbs/Month of May,” incorrect, despite the fact that, per Pitchfork and Joel’s Arcade Fire Blog (authoritative sources, I know), the band’s site recently added and removed a banner titled “Arcade Fire presents ‘The Suburbs.'” And then responded by putting a hand-written postcard on their own Web site saying that a single would, er, ahem, be out in “a couple of weeks.” So… June 1? Something’s up, of course, and — spoiler! — that something is going to be a new album. Probably one about suburbs. It will have guitars and anthemic choruses and maybe an organ; it will sell several tens of thousands of copies in its first week; it will sound great on tour and less great about two weeks after it leaks.

In fairness, the Arcade Fire’s actions may just be the obsessed-over band’s struggles to keep their projects under wraps until they’re ready, but if Sandra Bullock can hide a damn baby for three months through Oscar season and a national tabloid maelstrom, you’d think dudes could handle their probable lead single. My point here should be obvious: indie rockers, please, enough bullshit. What are you going to surprise us with next? “Inaccurate” album tracklists? Post-Ben Folds fake leaks?! Lady Gaga’s cast-off cigarette sunglasses? To put on my Lefsetz hat for a minute: you’re musicians: the surprises should be in the music. If you want to get people excited, tell us you are making it and then let us hear it. After all, the most successful viral campaign yet did just that. Radiohead’s In Rainbows announcement was as plain as can be: We made a record. You can have it in a week. Pay what you want. With a paragraph, they earned worldwide headlines. Then again, as the Arcade Fire surely know, not every band can be Radiohead — and as Radiohead fans learned themselves just two years later, for every In Rainbows, there’s a Wall of Ice looming, infuriatingly, around the corner. It’s enough to make you sick.

Critical Backlash is a column where I complain about things.