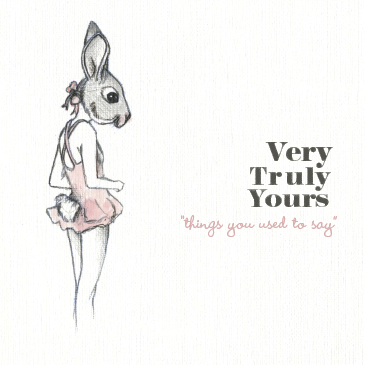 Very Truly Yours’ debut album, like its debut EP before it, finds the twee group already nostalgic. Things You Used To Say follows last year’s Reminders EP, and even their early singles (and by “early,” I mean, “year-old”) look back, title-wise: take “Popsong ’91,” a song paying homage to a year the band’s oldest members were likely going to elementary school and watching Home Alone on repeat. The group’s infatuation with the past extend to the music: the group’s early batch of singles were jangling and winning in a ‘90s Slumberland-y way, but it’s geography, not era, that’s changed with this release’s influences.

As hinted in Reminders, Very Truly Yours have taken to the softer, Glaswegian sounds of Camera Obscura and Belle & Sebastian over the last year, with singer Kristine Capua at times a dead (or at least more fragile) ringer for the former group’s Tracyanne Campbell. Things You Used To Say finds her branching out from sometimes aping Campbell’s affectations, though, turning to a softer style for the band’s newly sun-splashed chamber-pop.

Opener “I’d Write You A Song” mirrors Belle & Sebastian’s “Photo Jenny,” while “Homesick,” my favorite song on the disc, is also its most archetypical: a lead guitar arpeggio sparkling over major and minor 7th chords, high-hat-friendly drumming and a winsome, waifish vocal. One could fit that description to any number of songs from the two-decade history of twee, from, say, #Poundsign#’s “Michigan” to Math and Physics Club’s “La La La Lisa”; that doesn’t make the recipe any less endlessly effective. It also finds the band feeling focused and electric, an emotion lost on some of the collection’s more slow-twirling numbers. The album closes with a retro bent: “Puddles” is likable ‘60s kitsch, while “Sorry To Say It” plays like a hazier She & Him, with Kristine showing flashes of previously unseen sass. In a year with like-minded acts such as The School and Lucky Soul are mining similar influences with verve to spare, Very Truly Yours offer a misty, water-colored alternative. I have to admit, though, I wish they hadn’t shrugged off their Go Sailor fandom so quickly — a pair of these songs (including “Homesick”) showed up as fuzzier demos last year and sounded even better. Don’t sleep on Slumberland yet, you guys!

(Things You Used To Say is out now

[Editor’s note: I wrote this before seeing my prominent inclusion on the band’s press release and am now extremely flattered.]