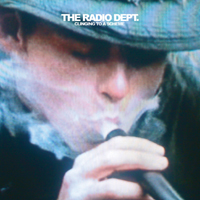 One has to wonder what the Radio Dept.’s scheme truly is. In an era where musician mystique often seems like an endangered species, the Swedish band has remained mysterious by letting its painfully personal songs do the talking. Perhaps it’s a Nordic thing, as countrymen like Jens Lekman or the Tough Alliance and their Sincerely Yours label operate under similar silence, but regardless, the Radio Dept.’s shadowy maneuvering has felt more the product of shyness than calculation. The group’s privacy has up until very recently been cause for blogosphere avoidance, not speculation—leaving the multiple delays of Clinging to a Scheme still up for analysis. When a rapper delays a release, it’s almost expected: such albums are scheduled in advance like summer blockbusters, only with the only outwardly obvious repercussions for a missed deadline an olive branch leak or two. (Big Boi: we love you, but c’mon already.) But the Radio Dept. record for Labrador, not Def Jam; it’s hard to imagine their contract forcing them to declare a date too early, much less the two or three the label announced before finally carving April 21 out in stone. >> Read the full review on Cokemachineglow.