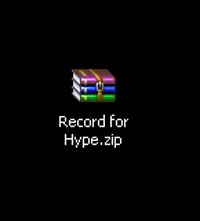 A series of developing events:

1) Vulture posts a screengrab via Rap Radar depicting what seems to be the tracklist of the new Kanye West album, zipped up as “Record For Hype,” Hype being music video director Hype Williams. Said tracklist includes 16 songs and lands at about 60.4 megabytes.

2) Obviously, my first response was to Google “Record for Hype site:mediafire.com.” I found it. It’s right here. It’s just over the 60.4 MB the screengrab indicates.

3) The zip itself is, inevitably, password-protected but seems to include the 16 tracks in question. If this is real, it’s probably an unmastered, unfinished version of the September-due album. Suggest your passwords in the comments, and no, “GAYFISH” and “TAYLOR” don’t work.