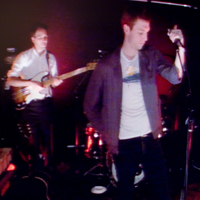 One thing I quietly noticed at SXSW this year: The Walkmen’s moment is over. The band played a number of buzz-chasing shows, but most people just didn’t seem to care; the conversation surrounding them was whispered if not unnoticeable. Premiering “Stranded,” the first single from this fall’s Lisbon, on NPR might be a sign of acceptance of the new hierarchy, or an indicator of the band’s increasingly (Grand-?) Dad-friendly sound: the track picks up where “Louisiana” left off and turns the dial down all the way to “mellow,” its reverb-drowned wall of horns sounding like Neutral Milk Hotel produced by an extremely gentle Phil Spector. Singer Hamilton Leithauser sounds as mournful and morbid as ever, of course — but this time, he might have actually have something to worry about. (Photo by David Greenwald)

The Walkmen – “Stranded”: stream at NPR

(Lisbon is due this fall)