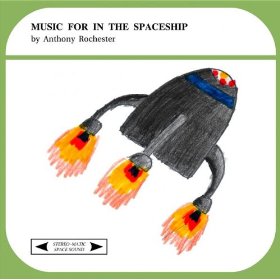 Space travel, to paraphrase Jon Vanderslice, is lonely. Such is the message of Anthony Rochester’s Music For Inside the Spaceship, an understated pop classic that rubs elbows with Field Music’s buttoned-up performances and Sondre Lerche’s jazz-leaning songcraft. Like Aussie countryman Guy Blackman, though, Rochester’s songs are a few martinis drier than his post-Bacharach colleagues. He sings with a coolness surely hiding heartache and long-distance longing, emotions he reveals on “She Visits Her Friends On The Moon”: “She’s always going further away,” he begins, before planting tongue firmly in cheek. “She’s visiting her friends on the moon.” But she might as well be, and the space-age metaphor works as both wry wink and sympathetic songwriting. In “Mathematics,” he sings the title subject “is all that we need/to solve the problems between you and me.” If only. Rochester’s scientific approach, however, is certainly enough to solve the problem of what album you’ll want to listen to on loop for the next month.

(Music For Inside The Spaceship was released in 2007