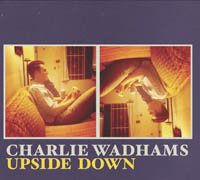 As a Jon Brionphile, it’s easy to over-credit the Los Angeles mainstay: his Beatles-meets-Bacharach songwriting and Enoian sense of mid-fi production ambition make for a complex but unmistakable sound evident in the work of artists from Fiona Apple to The Bird and the Bee. Brion, of course, has friends, from Apple to Aimee Mann — all frequent visitors to his homebase, West Hollywood club Largo.

While the Largo brand of unpopular pop had its heyday a decade ago with the release of albums by Brion, Apple, Aimee Mann, Elliott Smith, Badly Drawn Boy, Rufus Wainwright and others, the sound has spawned a few new practitioners over the years, perhaps through incestuous links in the comedy scene: Brion has been musically involved with Judd Apatow’s Funny People and the Adam McKay/Will Ferrell camp on Step Brothers and The Other Guys; Step Brothers star John C. Reilly is a Largo regular and appeared, too, in the Mann-soundtracked Magnolia. Which brings us, in this surreal Six Degrees of Charlie Wadhams, to Reilly’s Walk Hard: The Dewey Cox Story, a supremely funny movie satirizing Johnny Cash biopic Walk the Line. Wadhams co-wrote “Let’s Duet” and “Guilty as Charged” for the film and had another of his songs in Reilly’s Cyrus, showcasing a style both clever and heartfelt.

He is those things once again on his own Upside Down EP, a follow-up to 2009’s similarly excellent In a Goldmine. A veteran of the now-defunct Tangier folk scene (Mia Doi Todd, Inara George), his work nevertheless recalls the cross-town cleverness of his Largo peers. Over the new EP’s five tracks, he sketches a loose portrait of an L.A. youth coming to an end: “Don’t remind me, I’m 31,” he sings on the opening “People Want To Get Lost,” before airy harmonies beckon a lover to join in a fantasy escape: “You see this airplane / that’s our ride out of here / I’ll push the buttons and you steer / let’s take a trip down south somewhere / and never come back.”

The title track tries mock-Elvis innuendos on for size (single bar life in one’s 30s in action), but he fares best when he steers toward the sensitive: “Every time I picture growing old / I want you there / dancing with me,” goes the chorus of “Growing Old,” and gentle cymbal touches blanket “Heart of Stone” as he adds, “I never want to make you feel you’re wrong.”

But by the EP’s end, our kind-hearted hero — or at least his pal — seems to have wound up alone. Closing track “Somewhere In Sacramento” seems to provide a lyrical as well as sequential bookend to “People Want to Get Lost,” with Wadhams wondering what’s happened to an absent friend. “Hey Jim,” he sings, “I’ll see you again / somewhere in Sacramento / or anywhere you go / hey Jim / I heard you were off in Japan / did you have a good time? / did you stick to the plan? / and go around the world / you and a girl?”

We all know what happens to life’s best-laid plans. “You can do anything that you want,” he notes hopefully in the song’s chorus, yet Jim’s — or Charlie’s — travels have apparently landed him in Sacramento: not some sweet southern clime. Soundtracking this introspection is sweet, crisp autumnal music, all softly strummed guitars chords and nimble percussion. It’s the kind of deft, thoughtful release that ought to win Wadhams a regular invite to Largo — he’d be right at home, don’t you think?

(Upside Down is out now)