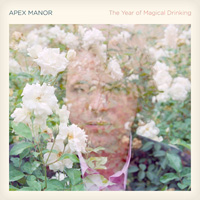 Despite an affection for Ryan Adams (and by extension, the Replacements), I like power-pop best when it’s bright and shining, not raw and gutter-dirty. On The Year of Magical Drinking, Apex Manor splits the difference, backing away from the vacuum-sealed sound of 2008’s Broken West swan song Now or Heaven and toward rich, roomy production that accentuates both grit and glisten. On songs such as “I Know These Waters Well” and “The Party Line,” frontman Ross Flournoy’s sunlit guitar anthems soar; on “Under the Gun” and “Teenage Blood,” he puts his pedals through earthier paces. His vocals offer a similar marriage, iron-clad fury melted into vessels for melody.

Whatever the sound, Magical Drinking is an album of rippers, capturing musicians rejuvenated by a new project. (Apex Manor, as Flournoy told me in an interview last year, came together after the Broken West’s collapse and a summer of writer’s block.) The (welcome!) guitar-centricity is almost surprising in these synth-soaked times, but as Apex Manor proves once more, power-pop remains the house that amps built.

(The Year of Magical Drinking is out today on Merge)

Flournoy with The Broken West at the Troubadour, 2009 / photo by David Greenwald