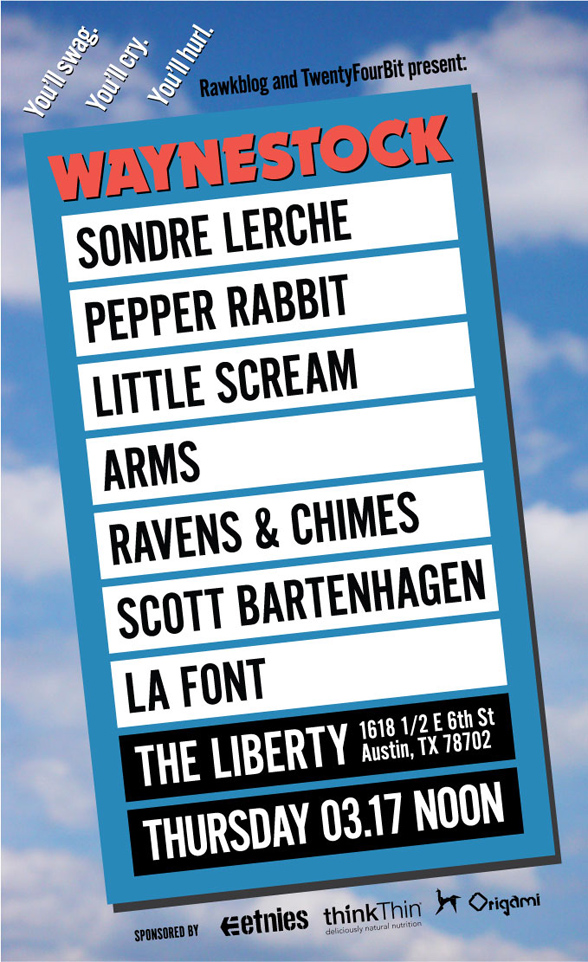 Poster by the amazing Traci Larson

No way! Way. Rawkblog and our pals at TwentyFourBit are proud to present our first-ever unofficial SXSW day party, Waynestock, sponsored by Etnies, thinkThin and Origami Vinyl. It’s all happening at the Liberty on Thursday, March 17, and we promise to make Wayne and Garth proud. Here’s the lineup and set times:

We’ll have free Pabst Blue Ribbon until it runs out, free (and gluten-free) protein bars from thinkThin and free shirts from Etnies, so come early and often. You can get to-the-minute updates at our official Twitter page, @waynestockSXSW, and RSVP on Facebook. We’ll obviously be covering the event right here and via @DaveRawkblog and @TwentyFourBit as well.

Take the jump for a free mixtape and more info on the bands playing.

LA Font: The L.A. garage-rock revivalists offer both tremendous riffs and witty observations. Perfect to get your day-drinking started, or at least shake off that hangover. [All posts]

Scott Bartenhagen: The California songwriter will be making one of his debut full-band performances at Waynestock, during which Sam Beam and Sufjan Stevens will hoist him on their shoulders and proclaim him the new king of indie-folk. Or you guys can, either way.

Little Scream: The Montreal singer’s debut was produced by the Arcade Fire’s Richard Reed Parry, who — not to start a rumor or anything — told me just before his band’s Grammy win that he was hoping to join her in Austin. But either way, you’ll want to catch Laurel Sprengelmeyer’s lovely, heavy performance. [Little Scream]

Ravens & Chimes: After releasing the urgent, excellent debut The Reichenbach Falls in 2007, New York chamber-rockers Ravens & Chimes are set to return with the accomplished sophomore effort Holiday Life. This is the most exquisitely heartbroken you’ll feel all week.

Pepper Rabbit: The L.A. psych-folkies have long been Rawkblog favorites — they made their blogosphere debut when I posted “Red Wine” — and they’ll be playing 90210-soundtracking classics from Beauregard and new jams from their upcoming sophomore album alike. [All posts]

ARMS: The Brooklyn guitar heroes, who released my favorite EP of last year, are readying sophomore album Summer Skills after touring with the Walkmen and holding down a New York residency in February. [All posts]

Sondre Lerche: The Bacharach-influenced Norwegian-turned-Brooklyn-based songwriter will be previewing tracks from his to-be-announced follow-up to the stellar Heartbeat Radio, which may include his Mondrian-debuted serious jam “Private Caller” (above).

In conclusion: Party on!