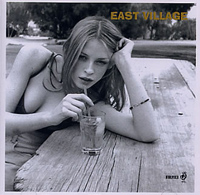 Per Wikipedia, East Village broke up long before Dropout, their 1993 debut, was released. Alas for the pre-Bandcamp era. The song “Strawberry Window” emerged some time later, on the 2006 two-disc deluxe edition of the album, but it was worth the two-decade wait: it’s a flawless slice of New Wave pop, as shimmering and suffering as the Cure’s better-known “In Between Days” or “Friday I’m In Love.” (Via Skatterbrain)