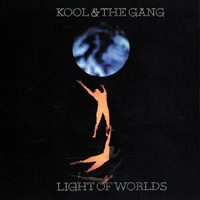 In 2006, Kool & The Gang’s “Summer Madness” appeared on a LeBron James/Nike commercial, one of the greatest music supervision decisions of all time. “Summer Madness” is about as good as a song can be, four minutes of Kool & The Gang reinventing the word “smooth” and exploring the new possibilities of ’70s synthesizers; the rising tones that comprise the track’s hook escalate like a skilled masseuse heading toward a happy ending. It’s the sexiest moment on the group’s Light of Worlds, their seventh studio album, though not the hottest: that honor goes to the unstoppably funky “Street Corner Symphony,” whose disco breaks and jabbing horn blasts only slow down to high-five Stevie Wonder.

The group is at its best when it’s instrumental; the effortless opening minutes of “You Don’t Have to Change,” the kind of track that has to soundtrack Aziz Ansari lovemaking fantasies, turn rough when a wobbly vocalist utters, “I walked / like a zombie in the night.” “Fruitman,” a proto-healthy eating anthem, sounds more Sesame Street than serious in the wake of the vegan and raw food movements. But though the Gang’s message may be a bit dated (and their singers less charismatic than Wonder or, say, What’s Going On-era Marvin Gaye), the musicianship remains revelatory. The synths get another turn in the future-soul spotlight on the upbeat “Whiting H. & G,” and the washed-out reverbs of “Here After,” meant to evoke heaven, echo all the way to, well, Washed Out. At a trim 36 minutes, the set’s as tight as the band’s rhythm section, though I’ll offer one improvement to the tracklist: “Summer Madness” sounds even better on loop.