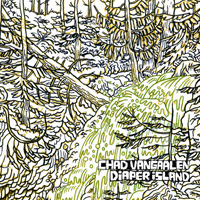 On Diaper Island, Calgarian mad genius Chad VanGaalen throws out the bathwater along with quite a few of his babies. The album abandons titular sci-fi scenarios, cloud-city ballads, analog reimaginings of electronic instrumentals; he restrains his heart-rending tenor to a single Harvest-style blues number (“Heavy Stones”) and one tender should-be hit single, the Bon Iver-obliterating “Sara.” There is no “Build a Home Like a Bee” or “Sing Me To Sleep.” In their places are electric guitars, a drum set, the room sound of VanGaalen’s new home studio and an angry vocalist.

Songs such as “Burning Photographs” and long-lost Haight-Ashbury anthem “Freedom for a Policeman” borrow mostly from the guitar duels of Woman, the likely-defunct post-punk act who released two Van-seared LPs before imploding. With Diaper Island by virtual default the eclectic composer’s most consistent, single-minded release, it’s easy to imagine him wanting to have crafted a more palatable full-length — then again, he’s probably as interested in scoring blogosphere hits as Celine Dion is in signing a 7″ deal with Paw Tracks. Intentions aside, VanGaalen’s brilliance lies in his fearless wanderlust. While it’s nice to hear him exploring one place for once, let’s hope his ventures through the ditch aren’t over yet.

(Diaper Island is out now on Sub Pop.)