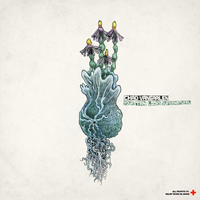 A number of artists have released charity efforts for Japan in the wake of the earthquake/tsunami disaster that pummeled the island nation, but put this one at the top of your list. The Your Tan Looks Supernatural EP is the first set of new music we’ve heard from the brilliant Chad VanGaalen since 2009’s Soft Airplane b-sides collection (aside from a fashion short film he soundtracked) and, as ever, it was worth the wait.

The beat-vivisecting title track is as mind-bending as any of Radiohead’s latest low end theorizing; “Fossilized Eye” pairs his trademark wail with a murky hip-hop beat that Tyler, the Creator would annihilate; “I’m a Witness” finds him turning once more to his brand of electric blues. The rest is as weird and warped as you might hope: there are few musicians who manage to offer both heartfelt songwriting and genuine sonic creativity with such equally impressive degrees of ability. Oh, and he’s about to drop a new album. Diaper Island is out May 19 on Sub Pop; hear/buy this one for a good cause after the jump.