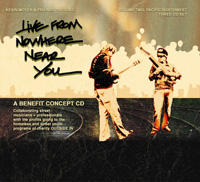 The bittersweet feeling of hearing a new song by your favorite, deceased songwriter is almost too heavy to bear. So take a load off before sitting down to Elliott Smith’s “The Real Estate,” a previously unreleased, unknown rough mix of a track that will appear in a more finalized form on charity release Live From Nowhere Near You Two. The recording may date back to Smith’s Heatmiser era — to these ears, it’s not far from the keyboard-embracing sound he shot for on Mic City Sons or his own XO, though with its show-off-y (and totally great!) guitar solo, it’s clear why it never made it to a previous release. The stream and the full story, from Live creator Kevin Moyer is over on Pitchfork; you can buy the mammoth compilation from Greyday Records to benefit Outside In.

Get more Smith, including my 22-track Proper Introduction compilation, on the Rawkblog Elliott Smith archives page.