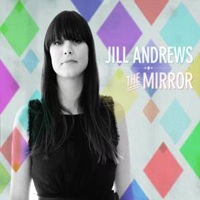 Editor’s note: In the past, I’ve dubbed album reviews “First Look,” even when they’re weeks late. Due to that inherent silliness, they’ll now be dubbed “Review.”

In the last decade or so, a handful of great (alt-)country voices have made themselves known. Neko Case, Ryan Adams, the terrifically underrated Sally Ellyson of Hem–surely there are more, but these pipes, at least, are undeniable. Joining their ranks is Jill Andrews, formerly of the likewise underrated, now defunct Everybodyfields. On her debut album, The Mirror, Andrews exults in an unwavering register that moves from a sturdy medium end to breathless highs. A Tennessee native, a hint of twang bends her otherwise unfrilled performances; in a drawn-out note or a sudden reveal of emotion, she communicates as much with subtle detail as a diva would with a full chorus of melisma. Her singing, both utterly controlled and thoroughly sincere, is best described as tasteful, a description worth extending to the album as a whole.

The Mirror‘s music is less indebted to the current Americana scene or the Everybodyfield’s alt-country roots than the piano-and-guitar session-pop of Carole King or Todd Rundgren. Upbeat songs such as the title track or “Another Man” are pure ’70s revival — they could’ve been outtakes from unlikely contemporary Mandy Moore’s surprisingly successful Amanda Leigh, while the more patient “Wake Up Nico” is the sort of gravitas-bearing adult-contemporary ballad Moore’s husband has effectively trafficked in since Gold. It’s uncomplicated music and quite lovely for it, the arrangements sized to best flatter their singer and recorded with a careful balance of studio crispness and bedroom warmth.

Andrews’ lyrics are plain and honest sometimes to a fault. “You” closes with a repetition of the line “You are so very special to me,” that makes me long for a deeper thought even during the subsequent guitar fireworks, but elsewhere, the simplicity is more effective: “You can be so sad / or you can be so happy, I know you can,” hits right in the gut on “Blue Skies,” the set’s most fully realized effort. “Wake Up Nico,” an opposite lullaby penned for her son, addresses the vampiric specter of divorce without letting it enter the room: “You know, Nico, your dad and I really love you.”

It’s the sort of full-hearted sentiment that may leave some retching and reaching for their Sex Pistols LPs, but there’s never a flash of doubt to the singer’s commitment to the material — or to her ability to deliver it. Not that there should be. It works in large part by weighing unfettered pronouncements against musical restraint, expressing impassioned sincerity (and the occasional wink) without devolving into melodrama. Case and Adams may have a head start, but they should keep an eye on the rearview: The Mirror is a fine fresh start to a career that will soar as high as Andrews’ lungs let her.

(The Mirror is out now)