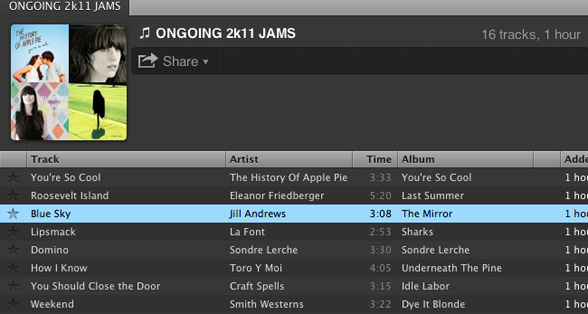 Spotify, the latest potential savior of the music industry, finally made it to the U.S. yesterday. I’m really enjoying it so far. As a collector of somewhat obscure music, it’s not going to replace my MP3s and iTunes/iPod library anytime soon, but it looks like the easiest possible way for me to 1) check in on mainstream pop that I wouldn’t bother pirating, much less pay for and 2) make streaming playlists without worrying about track legality, which will be nice for end-of-year lists, etc.

It’s got some gaps as of today: no Drag City, as far as I can tell, and weirdly, only the first Chad VanGaalen album. And no High Highs, which are songs that have only come out on Bandcamp anyway. If it can somehow keep pace with the myriad world of new indie tracks, it’ll be especially impressive (and useful) — and ethically, it feels nice to know that you listening to something means the band is making a little more money, even if you’ve actually paid for the album already. (I see you, kid in the back.)

It’ll be interesting to see if it does what Rdio, Rhapsody, etc. couldn’t and gains a serious following. For whatever reason, it seems to have that important air of cool about it, which could push it over the top — that and everyone finally has a smartphone. We’ll see. In the meantime, I’ve made a Rawkblog Ongoing 2K11 Jams playlist: assuming people are interested, I’ll update it every week or two. I also have some invites to share, though you’ll have to sign up via Klout. (Sorry.)