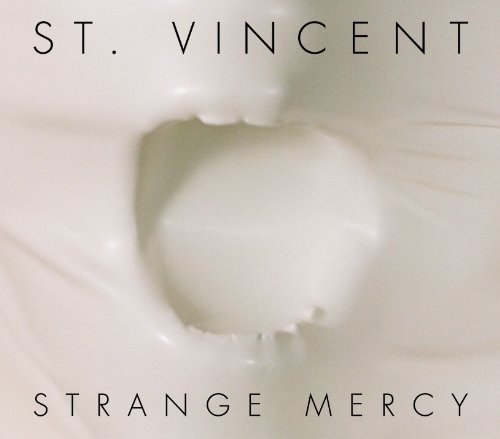 Since nobody else has asked: did something… happen to Annie Clark? When 2009’s Actor gave up the tongue-in-cheek wit and jazz-pop excursions of Marry Me, it was in the respectable pursuit of exploring the dark territory that has threaded through her work beginning with her first release, the Paris is Burning EP. But on Strange Mercy, the void consumes her. It’s the first St. Vincent album without her face on the cover, a sign, perhaps, that she’s tired of the dichotomy between porcelain-doll looks and fret-savaging musicianship; tired, as my colleagues have guessed, of holding back.

Judging by the lyrics, she’s tired of a lot of things: “I don’t want to be a cheerleader no more,” she wails on “Cheerleader,” but she surely knows that’s a different thing than actually leaving the squad. There’s no song more powerless-feeling than the title track, which would offer “Good news that I don’t believe / If it would help you sleep” to an anonymous accomplice and the authoritarian image of a “dirty policeman” with no saviors or solutions in sight. Only the “hysterical strength” of the track of the same name allows her to “stand up” against grief and burials. At every turn, Clark appears trapped, a claustrophobia that can’t help but extend to the audience.

“America” earns a handful of mentions in the album, and while Bill Callahan could only giggle at the idiosyncrasies of his troubled native land in song earlier this year, our national crises — mounting debt, a broken government, unstoppable unemployment, general fear and loathing — weigh heavier on Clark’s small shoulders. Strange Mercy is an album for its time, there’s no doubting that, but it’s pretty devastating to hear her so thoroughly defeated, especially knowing how easily she might’ve skewered our collective circumstances just four years ago. Even “Champagne Year,” a song devoted to turning 28, heaps on the gravitas by borrowing a melodic bit from Leonard Cohen’s “Hallelujah.” (It’s not the only reference: “Chloe in the Afternoon” nods to a French film, while “Surgeon” steals lines from Marilyn Monroe, still an icon of youthful tragedy.)

Except for perhaps Jens Lekman, it feels like there’s little place for humor in the current indie scene: the bands that draw the occasional laugh (Best Coast, Girls) don’t seem to intend to, while the cheesiest acts (Washed Out, Bon Iver and his “Beth/Rest”) are as earnest and serious as a homicide report. Marry Me has been roundly retroactively criticized for its naivety by writers suddenly embarrassed to like anything minutely twee, while four years ago, it was lauded for its precociousness; what a difference a career makes. It’s not like Clark was doing pratfalls — her debut’s biggest jokes were aimed, after all, at Jesus Christ. Unseriousness has a grand tradition in pop, from the Beatles sneaking anatomical references into their biggest hits to, ahem, entire Steely Dan albums. Perhaps its cousins, camp and melodrama, have been so thoroughly misdirected by Lady Gaga that they’ve all become forbidden tools; at any rate, Strange Mercy offers the unwanted sincerity of a lover about to leave.

To its credit, the album offers much of Clark’s best music. Many of the arrangements are dizzying and brilliant, the murky keyboard abstractions of Actor tightened and improved — at least in part. In retrospect, Actor was a warped crooner record, a synthesizer take on Sinatra’s Wee Small Hours, but Strange Mercy is much bolder. The chainsaw guitars and center-stage hooks of “Cheerleader,” “Chloe in the Afternoon” and pretty much the entire first side are flawless — “Chloe in the Afternoon” in particular sounds like the first Bjork song I’ve ever wanted to listen to twice. (It’s not a Bjork song. Stay with me.) The bouncing “Cruel” is the only track that seems to laugh through the tears, in no small part thanks to a keyboard riff that unintentionally(?) recalls, ahem, “Lemme Smang It.” The quivering guitar solo that closes “Surgeon” would made Prince stand up and salute.

“Strange Fruit,” a garden-variety guitar chug, is the first sign the album will flag; with the title track, the tempos slow and the music turns sluggish, unable or unwilling to recall the melodic effortlessness of, say, “Marry Me” or “Laughing with a Mouth of Blood.” Then again, to place her current feelings against unfettered beauty would be subversive, and those days seem to be behind her. Marry Me, with its straightforward balladry and winked subversion, feels like an increasingly distant part of the St. Vincent catalog, or even that of another artist (one that I miss dearly). Clark wrote the new album in the studio, and on second-half tracks such as “Dilettante” and “Neutered Fruit,” it shows: the song parts seem welded together, as clunky and nonsensical as that fucking Hugh Jackman robot movie; at best, they’re knotty and difficult, far from the instant rewards of the first side. “Northern Lights” could’ve been an apocalyptic mid-album highlight, but the lackadaisical chorus (“I’ve seen the northern, northern lights / convinced it was the end of times”) can’t muster the strength to leave the couch.

Three albums in, the clarity of Clark’s artistry and the strength of her emotions are forces to be reckoned with, which makes her focus on hopelessness a harder pill to swallow. What’s most disappointing of all is how staggeringly good the album’s first four tracks are; perhaps further listens will tease out intriguing complexities in the album’s second half, but nothing will make them more joyful. Times are hard enough without watching one of our brightest talents flicker out with barely a hint of warmth or comfort; if there’s nothing left for her in this champagne year, what tragedy remains in store for the rest of us? It’s strange mercy indeed.

(Strange Mercy is out now on 4AD)