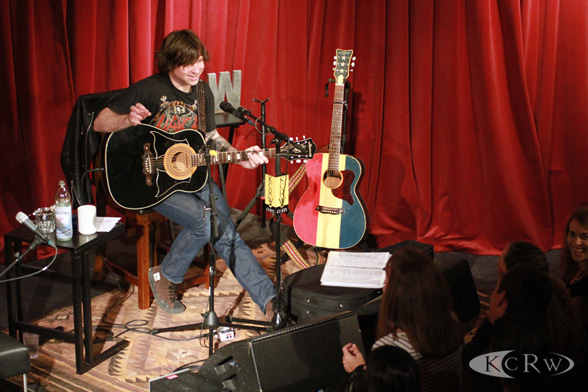 If 2011 brings me no further musical accomplishments than seeing Ryan Adams three times, I’d say it’s been a banner year. The Rawkblog hero returned for a third Los Angeles date on Wednesday, coming to legendary producer Bob Clearmountain’s Berkeley Street Studios to play a private session for KCRW‘s Morning Becomes Eclectic. The show will air on Dec. 2, but a few highlights: the intimate space allowed him to play an even quieter show than his Largo or Hollywood Forever appearances, with his falsetto barely above a whisper on songs such as “Like Yesterday.” It’s astounding how much control Adams has over his vocals; to call him alternative country’s Mariah Carey is a clumsy analogy, but you get the point. Ever the charmer, he spent as much time joking and tuning as playing songs, managing to pull plenty of new material. (An Adams/Jeff Tweedy comedy tour would be as funny as anything at Largo. Hell, they should just do a night there.) In his interview with KCRW’s Jason Bentley, he gave an exhaustive analysis of black metal and laughingly discussed the “failure” of his mid-career: “All it took was the live shows and everything else was poop icing on the shit cake.” Not sure if they can play that on the radio.

Adams is nothing but enthusiastic: he’s a metal nerd, I imagine, because being a nerd about anything is intensely satisfying. (Unless you’re a message-board Ryan Adams nerd, in which case you probably need a vacation.) It’s felt pretty special to see his enthusiasm in safe spaces this year, and judging by the quality of his performances on Wednesday, it doesn’t get any safer than having Clearmountain on the boards. Seeing Adams play these stripped-down shows makes you focus on the details — the intricacies of the guitar picking and the emotional colors of his rising and falling voice. I went home, put on Cold Roses and heard subtleties in his performances I’d never noticed. The gulf between hearing and listening can be enormous, but when you have the chance, I encourage the latter.