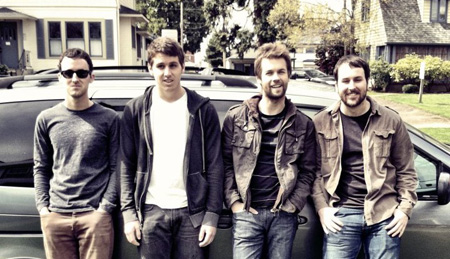 Moostache‘s debut, Anything, Alone, finds the Huntington Beach band following the scrappy guitar tradition of a number of local heroes — the Henry Clay People, the World Record, pretty much any L.A. act that’s ever made it onto Aquarium Drunkard. (Love you, dude.) The album’s a winning set of fuzzy riffs and post-Buddy Holly melodies, but I like them best in sentimental mode on “EOS,” a not-quite ballad with a wounded melody that recalls dear, departed indie-pop heroes Pants Yell! (Anything, Alone is out now on Bandcamp)

Robert Pollard still breathes, but there are others keeping the power-pop torch burning. Chief among them: Wrapping Paper, a sunny, lo-fi project led by Crazy Tim. The band’s You Could Appear Anywhere EP, only its third official release, shimmers in the summer heat like an exceptionally well-maintained ’72 Trans Am. (Get the EP for $1.99 from Giantship Records)

We need more bands like Paramore. States is one of those bands. The new group — full of emo scene veterans — borrows just enough from Hayley Williams & Co. for debut set Room to Run to sound like contemporaries, not rip-offs (though on songs such as “Everlasting,” they come pretty close). It’s an album of enthusiastic, riff-heavy pop-rock with enough gloss for the radio and enough passion for you not to care. (Room To Run is out now

Want new music delivered directly to your inbox? Sign up for Mercury Music, our Digital Record Club, and get your first month free.