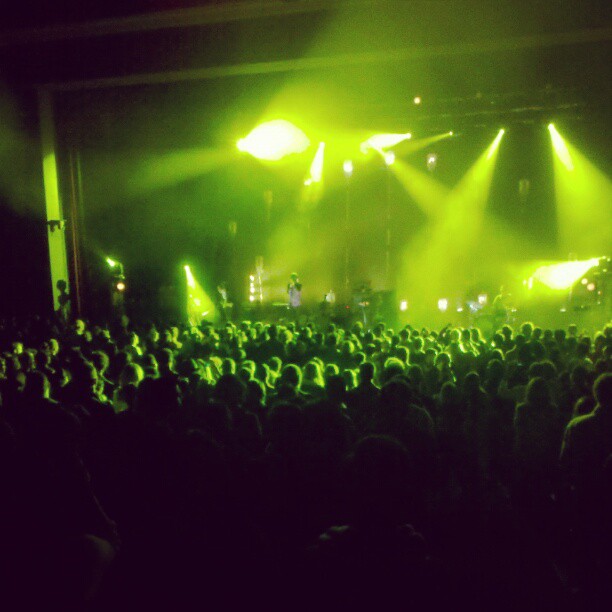 Grizzly Bear’s first Los Angeles show of note was at the Satellite, then Spaceland, in September 2006, just over six years ago. Yellow House, their second album and full-band debut, was a few weeks old. The band that took the stage then was not the expected cobwebbed folk act, appearing in a lovely sepia from a dusty attic trunk; the set was beautiful but at times raucous, even antagonstic. They played a noise jam in line with the rebellious music then being pursued by another group of experimental songwriters, Akron/Family, that nearly blew the room over. They have yet to record it.

The surest way to mark a band’s upward trajectory in the post-Napster era is through its venue bookings. Seeing musicians perform live still requires buying a ticket and being present in a room, a vote of visible confidence and the kind of stat that piracy and streaming services of all stripes have obscured in the home listening experience. The Satellite holds 260 people. The Greek Theatre, where the quartet performed last night, singing in a tree-lined setting at last appropriate to their moniker, tops out at nearly 6,000. At their current rate, in another decade, they can headline the Hollywood Bowl, though I doubt it’ll take that long.

Grizzly Bear was the recent target of a New York magazine cover story probing their finances (unsuccessfully, for that matter) and what it means to be a successful indie-rock band. Their record sales, 40,000 in the first week, seem at odds with their growing concert draw, but similar ratios appear throughout the pop world, where Lady Gaga’s 30 million Twitter followers might fill her shows but in large part can’t be bothered to pay for her album, even for $1. Grizzly Bear have nearly 60,000 Twitter followers: perhaps they are exactly as popular among serious fans as their statistics say. Yet a show, somehow, is less of a commitment and a more inviting affair than the arcane practice of buying an album — even with $22 wine carafes, at least a night under the stars with friends doesn’t require a fan club membership.

It was a great relief that there were no numbers involved in their Wednesday night performance, only the intricate mathematics of the group’s powerful musicianship. Their 90+ minute set drew from each of the last three albums, including this year’s excellent Shields, though Yellow House — the album capturing them at their most ghostly and gauzy — received the most love. Opening duet “Speak in Rounds” allowed co-frontmen Ed Droste and Dan Rossen the chance to present themselves as compelling equals; the wonder of Grizzly Bear lies in the way each member’s strengths pushes the whole to dizzying heights. Both Droste and Rossen sing with a sense of deep feeling, Rossen with a craggy sobriety and Droste, the more dynamic vocalist, allowing his throat to burn with melodrama; they never sound richer than when they’re joined by their band mates in full-on choir mode, their harmonies flying out above the trees.

The electric energy of their long-ago Spaceland set remains in full crackle. Grizzly Bear’s albums have become more athletic over the years, but their muscularity is still clearest on stage. Bassist Chris Taylor and drummer Chris Bear played in perfect lockstep on Wednesday, their rhythmic attack hitting with the speed and fury of a middleweight boxer. Dancing to it is a surprisingly reasonable endeavor, though segments of the Greek audience were too busy filling up their lungs for that. “Some of you are having a really good time!” Droste joked as pot clouds passed toward the stage. But the band needed the oxygen. At their best, in songs such as “Two Weeks” and “While You Wait for the Others,” Grizzly Bear’s music is fundamentally physical: the ordered weight of its rhythm section presses against their guitar chaos and soaring vocals like the pavement against a runner’s feet. There’s a fear that can come with flying. At a Grizzly Bear show, better to get high, however you can.