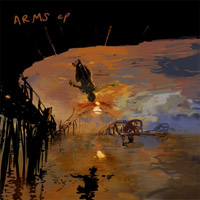 After Harlem Shakes split last year, it was heartening to hear that guitarist Todd Goldstein would be soldiering on by resuming his dormant ARMS solo project – and more heartening to finally hear him play the new songs at SXSW. Along with ARMS’ Austin dates, the band released a free, five-track EP that week which offers a taster of sounds of the full-length to come.

The EP (titled, simply, EP) is a grimy, reverb-splattered collection – less direct and straightforwardly beautiful than the songs sounded live. What they lose in brightness, though, the songs gain in hypnotic draw. Harlem Shakes were a spastic, unmedicated and ADD-suffering indie-pop band, but ARMS’ stuff is more introverted, full of luminous guitar arpeggios and mournful vocals. Which is not to say the band shows no muscle – Goldstein allows himself enough guitar breakdowns to keep the songs as sweaty as they are self-aware. Body and mind after the jump.