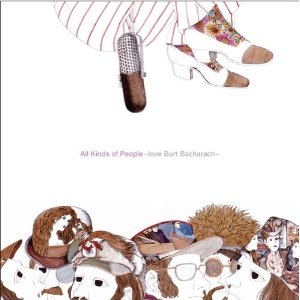 There’s not enough hyperbole in the world for this one. Jim O’Rourke’s Japanese-released Bacharach/David covers album is, start to finish, a dream project — jazzy and sincere in homage but minimal and surprising in a way one wouldn’t expect from Burt’s own sometimes schmaltzy ’60s arrangements. For “(They Long To Be) Close To You,” made a hit by the Carpenters, among others, Wilco’s Glenn Kotche sits in on drums, Haruomi Hosono offers vocals and Jim brings the rest. All Kinds of People ~Love Burt Bacharach~ is listed on Amazon, but as “discontinued by the manufacturer” — what this means in terms of your ability to buy it, I don’t know, but you have to hear this album. However you can. (Via Twentyfourbit)