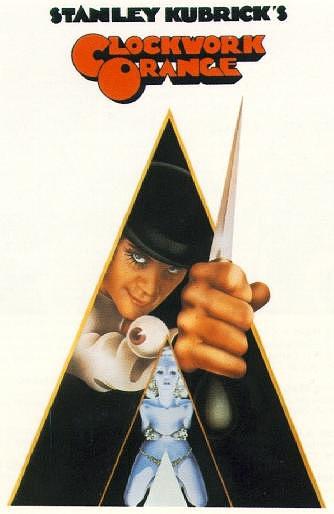 As previously noted, I’m making my way through the Stanley Kubrick filmography; the time has come for A Clockwork Orange. Some really good moments, though not quite the cinematic mind-blower that The Shining or 2001 was, visually or pacing-wise. It felt a little grungy and less deliberate, which is in keeping with the material, to be sure, and the shocking violence stands in for the visual expanse of a film such as 2001 — still, I missed seeing the limits of Kubrick’s imagination at play.

It’s meant to be an allegorical film, but I’m not sure exactly what it meant to accomplish with its moral: essentially, it places anarchy against fascism, with neither an acceptable option for Man, caught in the middle with his primal urges toward sex, violence, fear. The film seems to present alternatives twice in the form of the prison’s free will-embracing priest (who arguably merely offers another form of indoctrination) and in our anti-hero, Alex’s, single act of selfless goodness, when he gives spare change to the beggar in street. This act is rewarded, of course, with a beating followed by a near-drowning. Does Kubrick mean this to say people can’t change? Or the equally cynical view that while evil begets more evil, in an evil world, so does good? I hope I’m reading too far into this scene, as such an interpretation turns the film an even darker shade. In the end, Alex is rewarded for falling in line to authority long enough, with a return to “ultra violence” brewing in his heart, which seems to point toward my earlier thesis, that neither extreme — control nor chaos — is the answer. Man must stand somewhere in between.

On another note, it’s interesting to see the role of women — in this film and other violent movies of the era such as even the drastically different The Warriors — reduced to that of defenseless sexual object. Imagine Clockwork Orange being made today in the context of the Angelina Jolie ouevre. In that respect, at least, we seem to have come a long way.