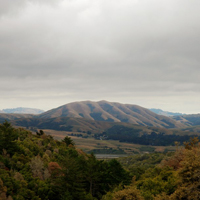 It bears remembering that the Dirty Projectors made the finest album of last year. Mount Wittenberg Orca, a song cycle initially written for performance at New York’s Housing Works in a benefit concert organized by Stereogum’s Brandon Stosuy, isn’t a proper follow-up — but it is a worthy sequel. The mini-album finds the band diving head-first into the harmonic mazes they explored on 2009’s Bitte Orca, determined to reach the limits of indie rock lung capacity. The music stays spartan, leaving the voices room to shine (or shatter glass) and Bjork bjorks around harmlessly, sounding particularly nice playing call-and-response with the DP’s vowel sound montage on “On and Ever Onward.” Don’t play this one for your cat.

(Mount Wittenberg Orca is out now — buy it for charity)

Dirty Projectors + Björk- All We Are by DominoRecordCo