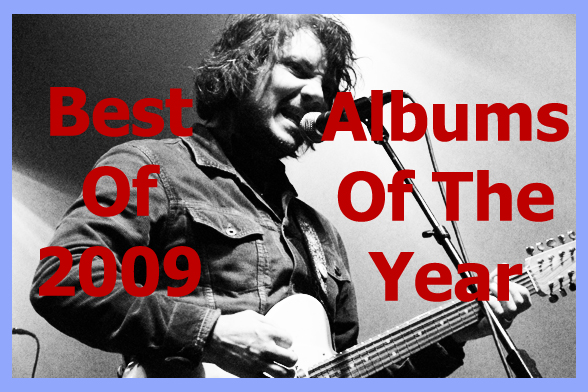 After a year where I avoided making a best-of for six months, I’m thoroughly excited to bring you this year’s albums of the year list. After the jump, the 40 finest albums of the last year of the decade — a list full of fresh faces and modern heroes alike.

Editor’s note: As the vast majority of these appear on my Best Songs of 2009 list, I’ll point you there for the MP3s. Please, seek these bands out on the Internet and pay them money for the privilege of listening to their music — they deserve it.

1. Dirty Projectors – Bitte Orca
What I said: “A big-picture album whose broad canvas should embarrass the ambitions of a number of the band’s New York neighbors. Bitte Orca lands between edgy art and the comfort of rock catharsis; it’s the best of both worlds.”

2. Harlem Shakes – Technicolor Health
What I said: “A collection of extremely dense jams that filter every good indie rock idea from the last half-decade, [making] Harlem Shakes too endearing, and far too talented, to deny.”

3. Bill Callahan – Sometimes I Wish We Were An Eagle
What I said: “Eagle flies toward the top of Bill Callahan’s catalog under both his Smog moniker and his given name, a collection of darkly funny songs that poke fun at his own misery (”Eid Ma Clack Shaw”) even as they admit the depths of his despair.”

4. St. Vincent – Actor
What I said: “The album [is] a slippery piece of work and one less immediately rewarding than Marry Me — but given time, its predecessor’s equal. Annie hides headphone Easter eggs throughout and proves herself once again a sonic individualist — filtered drums, pedal-warped guitars and synthesized choirs fill up the songs with sounds alternately red-lining and silky.”

5. Atlas Sound – Logos
What I said: “A well-flowing collection of sleepy, swirly ambient pop — the fusion of melody, structure and adventurous sonics that Deerhunter’s early stuff hinted at but rarely achieved.”

6. Grizzly Bear – Veckatimest
What I said: “Grizzly Bear deserve a lot of credit – and maybe even an engraved plaque from rockist preservationists – for making guitars sound cool again… Meanwhile, the impressionistic vocal mixtures that colored Yellow House are even better here.”

7. Paramore – Brand New Eyes
What I said: “Paramore’s Brand New Eyes, the follow-up to their stellar Riot!, plays into plenty of modern rock tropes… but arguably, no better act has come out of what’s left of “alternative” in the last decade.”

8. Phoenix – Wolfgang Amadeus Phoenix
What I said: “Never before has the French band sounded so supremely confident in their glistening neo-power-pop.”

9. The Clientele – Bonfires on the Heath
What I said: “Bonfires improves on 2007’s lovely, string-laden God Save The Clientele thanks to a more adventurous mood: livelier tempos, Latin horns and journeys into psychedelia accent the songs, which remain anchored by [Alisdair] MacLean’s introspective guitar picking and vocals and a gently insistent rhythm section.”

10. Animal Collective – Merriweather Post Pavillion
What I said: “This is the sound of AC turned adult… The druggy, psychadelic sound that Strawberry Jam ignored and Feels and Sung Tongs were too lo-fi to embrace is on full display here, but otherwise the album feels like a career summation — less Hail to the Thief and more Rubies.”

11. Cymbals Eat Guitars – Why There Are Mountains
Like Technicolor Health, a record of exuberant, extremely rewarding indie rock that would’ve been enormous in the heady days of 2005. Don’t sleep on it now.

12. Neko Case – Middle Cyclone
Maybe not the best Neko record, but certainly my favorite: for the first time, the alt-country fixture sounds like she’s having fun. So am I.

15. Wilco – Wilco (The Album)
About a third of this should’ve been titled Jackson Browne (The Album), but the rest is all the excellent work we’ve come to expect from the best band in America.

16. Asobi Seksu – Hush
Shoegazer act turns down the volume, turns up the songwriting.

17. Sondre Lerche – Heartbeat Radio
Not Sondre’s best (that’d be the jazz-rooted Duper Sessions), but his best straight pop record since his debut. 2009 Bacharach.

19. Division Day – Visitation
A dark, otherworldly record that went too unrecognized in this one.

20. Ned Collette and Wirewalker – Over The Stones, Under The Stars
The haunting Australian folkie is as hypnotic as ever with a new backing band, but now he’s added psych-rock force to his arsenal.