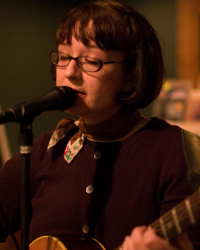 Brave Irene is the new project of Rose Melberg, the best singer in the universe. Inevitably, the band’s debut EP’s debut singles are absolute jams. Both “Longest Day” and “No Fun” pick up where Melberg’s Tiger Trap and Go Sailor left off, picking up the pace and going electric after a pair of quiet solo records and her tenure in the Softies. There’s a ’60s psychedelia influence at play here along with the familiar indie-pop jangle — the lava-blast lead guitar of “No Fun,” the vintage keyboards of “Longest Day” — and Melberg shares the vocal stage with the harmonies of members of the five(!)-piece band. The fuzz-guitars get your attention first, but the dueling keyboards of Caitlin Gilroy and Jessica Wilkin give the songs flesh as drummer Laura Hatfield lays down a backbone. I will now listen to them on loop for the next two hours, and probably until the self-titled EP drops on Slumberland on March 15.

Previously: Rose Melberg – “This Year Will Be Our Year” (Zombies cover) | All Melberg posts