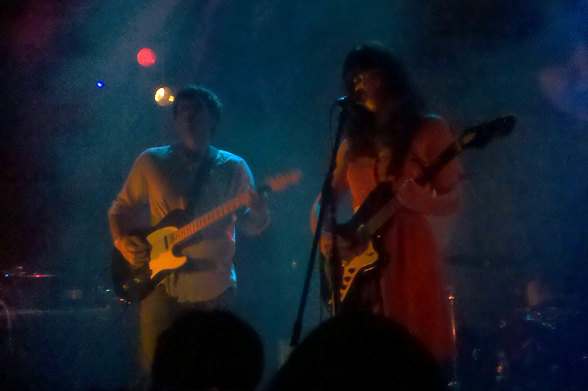 Perhaps the greatest irony of the modern music industry is the reversal of the performing-recording continuum. The Beatles labored in Hamburg clubs long before they could afford to give up baseball stadiums for studio sessions; when Steely Dan declined to tour at all, it came at the height of ’70s record company excess. 40 years later, bands have little choice but to play their first shows after crafting entire discographies in their bedrooms, rebuilding their sound for the live arena instead of struggling to translate its intensity to tape. It’s created what often seems like a greater divide between recording and performance, long two different animals that deserve to be judged as such. (Readers of pop criticism who too rarely recognize that a critique of a band’s show does not necessarily extend to a judgement of their records — much less their work ethic, generosity of spirit or how badly really they deserve this! — are at least partially to blame here.)

That schism was on display at the Echoplex on Sunday night, as a trio of bands attempted to bring their Internet anthems to life. Let’s get this one out of the way: Grave Babies are not a worthwhile live band. The group plays competently aggressive drone-rock that’s neither as challenging as No Age or Liars or as cathartic as recent punk breakthrough Iceage; they would’ve be adequate enough to sway to for 45 minutes if they’d traded the singer for someone who didn’t sound like Werner Herzog’s Cave of Forgotten Fraternity Hazings. On record, the extensive reverb may color his timbral failings as evocative rather than fearful, indecipherable moans, but I doubt it.

By contrast, twee act Seapony used the stage to emerge from the sonic veneer of this year’s Go With Me and the self-titled EP that preceded it. Singer Jen Weidl offered a shy alto free of vocal filters, while the band’s jangling tones were more Tiger Trap than Tennis. Last year, I wrote about the weird dissonance between the group’s presentation — the found-footage video, the lo-fi lining, even the aquatic band name, all signifiers of Internet indie trendiness — and their classically twee songcraft. Given that the band name-dropped the Softies on Facebook last week and closed the set with an encore cover of Sarah Records heroes the Field Mice’s “Emma’s House,” they seem intent on proving their indie-pop pedigree on tour, making their on-record style seem even less comfortable. Whether that was a careerist choice or an attempt to give their simple songs edge, I can’t say — either way, the records are good, but I liked the band I saw last night a lot more.

Craft Spells, a group with the considerable approval stamp of Captured Tracks Records, if not a Pitchfork Best New Music, played like a genuine buzz band, offering a tightly rehearsed set that re-imagined their bedroom New Wave as hard-charging guitar rock. (Re: Pitchfork, Ian Cohen’s 7.7 review remains spot-on.) Going high-energy wasn’t a bad idea, given most bands have the opposite problem once their mid-tempo songs hit a live audience, but it meant sacrificing some of Idle Labor‘s naive charm. (And also its synthesizers. The band badly needs a keyboard player.) Unlike his openers, Justin Paul Vallesteros could’ve actually done with a touch of reverb on his vocals in the Echoplex’s lengthy hall. Still, his songs — hyper-melodic ’80s revivalism from a world in which New Order’s only album is Substance — are sturdy enough to work in both contexts, especially set closer “You Should Close the Door.” (I was struck suddenly by how much it sounded like Modern English’s “Melt with You,” which a headphones listen confirms.)

Like Wild Nothing and his Captured Tracks brethren, Vallesteros seems primarily concerned with form and melody, writing three-minute efforts that never turn down the variously experimental, thorny, indulgent paths bands like New Order or the Cure followed in between knocking out perfect pop gems. Frankly, it’s one of the reasons I’m so taken with the current New Wave/post-punk revival. If Craft Spells’ songs (and Seapony’s) sound like variations on a theme, it’s one that’s worth perfecting — on stage or on wax.