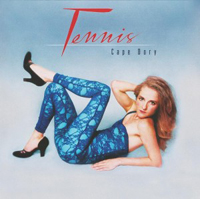 Tennis’ debut album is a second serve: not a blistering ace, but enough to put the band in the game. Cape Dory is the latest entry into the post-Vivian Girls quagmire of vaguely ’50s/’60s-influenced female-fronted garage-pop acts; they are its Bush, perhaps, or its Alice in Chains. It sounds basically how you’d expect it to sound and less memorable than you’d hope.

The album is perhaps most interesting as a selection of influences: the guitar tones and rhythmic impulses of songs such as “Bimini Bay” and “South Carolina” share more with the early ’00s New York of the Strokes and the Walkmen then indie-pop predecessors Tiger Trap or, for that matter, the Ronettes. The problem is that appropriating the sounds of a sad bastard style leave what should be glimmering pop songs drab and grey. There’s a reason the ’90s indie-pop movement turned toward the brightness of treble and jangle instead of cobwebbed reverb.

What makes Cape Dory distinctive, if that can be said, is the conviction of Alaina Moore’s singing, which arrives with enough warbling passion on lines like “When you kiss me, you really kiss me” to make Best Coast sound like Ben Stein. For 28 minutes, the album’s nice while it lasts. But like a summer romance, don’t expect to love it forever. (In acknowledgement of the band’s outsized zeitgeist-capturing: if you like this, let me point you toward another, better noisy nautical-themed indie-pop album and another guy-girl duo. Enjoy.)

Tennis – Take Me Somewhere by forcefieldpr

(Cape Dory is out now on Fat Possum | 2011 release calendar)