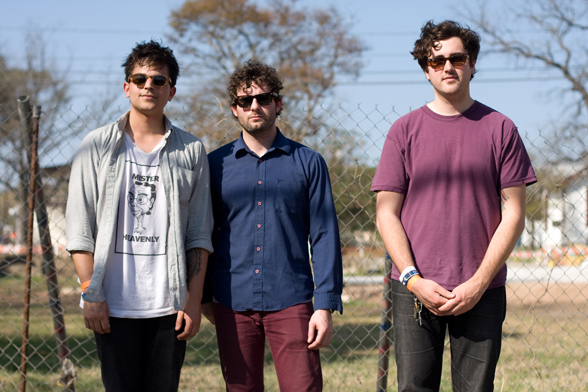 Cymbals Eat Guitars – Lenses Alien: The best of the month, Lenses Alien is that increasingly rare bird — a guitar-centric indie-rock album. That’d be enough in these synth-addled times, but the band manages to push themselves and the genre (!) forward with songs that sprawl and shrink to fit with equal parts melody and ferocity. Strong song-for-song but stunning in total.

Pepper Rabbit – Red Velvet Snowball: The band’s sophomore follow-up to Beauregard (itself a collection of EPs) is an improvement on its debut, grounding psych-pop atmospherics with bolder melodies. The choruses will stick in your head, but so, too, will the 1999 Dave Fridmann production influence that pokes cleverly through the tinfoil songwriting. [TRACK REVIEW]
>> “Rose Mary Stretch”: mp3

Widowspeak – Widowspeak: Anything on Captured Tracks gets my full attention this year, though the Cat Power gloom of Widowspeak’s debut marks a shift from the label’s usual New Wave revivalism. Effective, if predictable, stuff that’s at its best when it rocks hardest (the four-on-the-floor “Puritan,” the almost-garage-girl-group of “Hard Times”) or throws itself upon Quentin Tarantino’s feet (the Western fantasia of “Gun Shy”). [REVIEW]

Records I didn’t quite get to and still want to: Mr. Heavenly’s debut (their SXSW show was terrific); Thundercat’s The Golden Age of Apocalypse and Hotel Light’s Girl Graffiti. I gave up on Watch the Throne after one spin but it’s probably due for another.